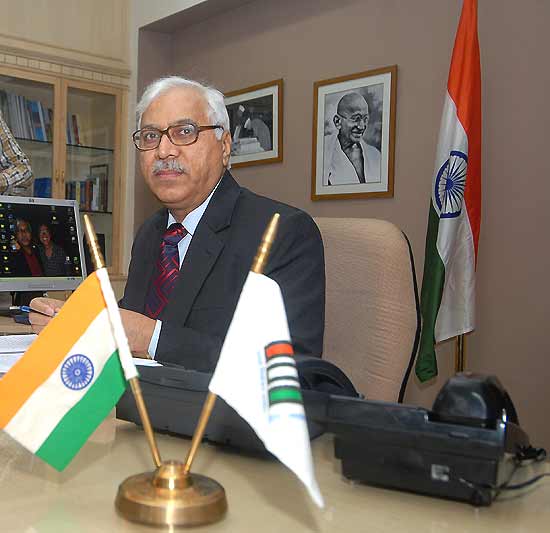 The Election Commission has put the fear of stringent action, should the model code of conduct be violated, in the states going to the polls. Chief Election Commisioner S.Y. Quraishi’s order to cover all statues of Mayawati and elephants (the symbol of her BSP) has seen the Uttar Pradesh chief minister crying foul. In an interview with Anuradha Raman, he explains he has been equally tough on netas from all parties. Excerpts:

Doesn’t the decision to veil the statues of elephants and leaders of the BSP invite the charge that the Election Commission is targeting one party?

Where is the question of targeting anyone? First, it is not all the statues of elephants. It is those statues of elephants erected at public places and at government expense. It is also not about other leaders of the BSP. The order is to cover the statue of Mayawati, an active politician, president of the BSP and its main campaigner. The commission’s decision to cover statues is in keeping with its mandate and consistent practice. Our job is to maintain a level playing field and there are existing instructions to remove from all public places the photographs, pictures and so forth of political leaders which could bring undue advantage to certain political parties and candidates to the disadvantage of others. While other parties/candidates cannot put up even a poster or banner on public property, how can a statue resembling a party symbol built at public expense and put up in a public place be allowed to be displayed?

"What do we do about elephants on the road or in forests? Such questions show a lack of seriousness."

But Mayawati asks why shouldn’t cycles and lanterns, symbols of the Samajwadi Party and the Rashtriya Janata Dal (RJD), be covered?

We have seen more remarks of the same nature: What do we do about elephants on the road or in forests, lotuses in ponds and temples? Should people be asked to wear gloves on their hands? These remarks show a lack of seriousness that is disappointing. Questions have been raised about what should be done with various living and non-living objects that might resemble party symbols. First, my question is, are they created using government funds and displayed in an election situation? Second, even when these are created with government funds, we need to see if they are part of the normal functions of any government, irrespective of party affiliation? If we have statues of other symbols built in such a manner, we will definitely look at them during elections.

Is the model code of conduct binding on advisory bodies, such as the NAC?

The code will of course cover NAC and similar organisations and their proposals if they have an impact. If facts are brought before us, we will take a view.

You had a phenomenal success in curbing the use of money in the Tamil Nadu elections. How do you plan to replicate that example in Uttar Pradesh, Punjab and Uttarakhand?

To control money power tops our agenda. The commission has created an expenditure monitoring division, with a senior IRS officer as its head. We first implemented election expenditure monitoring measures in Bihar and then in Tamil Nadu, West Bengal, Kerala, Assam and Pondicherry. The measures proved very effective, especially in Tamil Nadu, where money power was a big problem. We have further streamlined our mechanism for Uttar Pradesh, Punjab, Uttarakhand, Goa and Manipur. There are a series of measures now in place to prevent the flow of illegal money during polls. These include the opening of separate bank accounts for campaign expenditure in order to make monitoring easy, restriction on movement of cash without proper documents, deployment of surveillance squads at strategic points, 24x7 vigilance and the maintenance of shadow expenditure registers for each candidate to prevent under-reporting.

What is the level of money power being used in Uttar Pradesh in the light of money seizures so far?

Money power disturbs the level playing field in elections and induces corruption in public life. The seizure of unaccounted money only indicates the gravity of the problem. It is definitely an issue in Uttar Pradesh and the commission has taken strict measures to control it. We are encouraged by the effects of our measures. Rs 30 crore in cash has been seized so far in the state. For every crore seized, many more have been prevented from moving. It is heartening that we have started making a dent on a serious sickness that affects elections and many aspects of our lives.

"The BJP hasn’t called the EC pro-Congress. In fact, the party has expressed confidence in the commission."

Besides the administrative problems in managing a huge state like Uttar Pradesh, what other difficulties do you foresee in manning the elections in the state? Are these difficulties the reason for staggering poll dates?

One big challenge is to ensure that law and order is maintained and the whole election process is completed peacefully. Vulnerable communities are to be specially protected so that they can exercise their franchise without fear and pressure. Appeals on ground of religion and caste are also a matter of concern. The commission is quite concerned about the extremely low level of voters’ participation in Uttar Pradesh and would like to see it enhanced through a range of measures for voter education, facilitation of voting, and the provision of a peaceful environment. The staggering of polls is based on a whole range of considerations, including availability and movement of security forces, school schedule, festivals, weather conditions etc.

Giving the commission’s stringent position in dealing with paid news in the last general elections, do you see a similar replay in Uttar Pradesh? How do you plan to curtail paid news?

The commission has acted with its best ability to keep the election arena clean of paid news, after persistent representations from political parties, media groups and citizens at large. We have put in place district-, state- and commission-level committees to monitor and issue notice on suspected cases of paid news. This mechanism has worked fairly well in recent elections and we hope it works in the current elections as well. Political parties and media houses have been briefed and sensitised in advance. Some notices have already been issued on suspected cases of paid news. We have written to the Press Council of India for support to strengthen this mechanism.

The commission ticked off law minister Salman Khurshid for announcing a quota within quota for the minorities? Was that a violation of the code of conduct? If so, how are you proposing to deal with him?

We received a complaint from the BJP. We asked Mr Khurshid to respond. He has replied and sought a personal hearing. The hearing is set for January 20.

There is a perception that the commission is pro-Congress. The BJP has alluded to your partial attitude to the Congress? Are you partial?

I am surprised by this question. The BJP has not levelled any such charge. In fact, in a recent letter, the party has expressed full confidence in the commission. Where is this so-called perception you are talking about? The national perception of the commission’s neutrality is our strength. Any suggestion to the contrary would be misguided and unfortunate.

‘We Were Not Happy With India’s Stance At The IAEA’