Can the Opposition unite to place skids on Aziz's road to the National Assembly? 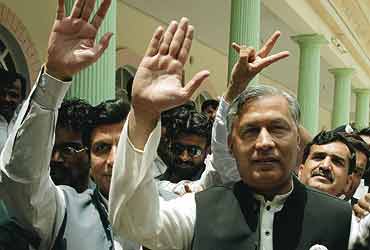 outlookindia.com
-0001-11-30T00:00:00+0553
In theory, August 18, 2004, has all the potential of becoming a watershed in the history of Pakistan's democracy. On this day, people in the constituencies of Attock, Punjab, and Tharparkar, Sindh, will vote in twin byelections. These are no ordinary byelections: their results will decide whether finance minister and prime minister-in-waiting Shaukat Aziz can fulfil his calling by being voted to the National Assembly.

Even President Pervez Musharraf must uphold certain constitutional obligations in order to provide a stamp of legitimacy to what many in Pakistan are calling a sham: that is, the lame-duck democracy he presides over. How convenient it would have been to just nominate a prime minister, to not go to the people and seek their vote. But the Constitution of Pakistan has provided a few inconvenient bumps: only a member of the National Assembly can become Leader of the House, and only he or she can become the prime minister. And Shaukat Aziz, economic phenomenon though he might be, is not a member of the National Assembly.

This constitutional inconvenience has led many in the land of 'controlled democracy' to indulge in fantasies: suppose Aziz bites the dust in the twin byelections? What would Musharraf do then? Won't Aziz lose if the Alliance for Restoration of Democracy (ARD), an umbrella group of political parties, including Benazir Bhutto's Pakistan People's Party (PPP) and Nawaz Sharif's Pakistan Muslim League (PML-N, sink their differences with the Muttahida-Majlis-e-Amal (MMA), a right-wing alliance of Islamist parties, and provide a united front against the might of Musharraf and his brigade?

Hoary pundits with their experience of Pakistan's democracy aren't too enthused. They know the army possesses a bag of electoral tricks more potent than the combined ammunition of the Opposition. Remember Musharraf's referendum, the thumping endorsement of his quest to become President for five years? Najam Sethi, editor of the weekly Friday Times, is therefore justifiably pessimistic: "It is no longer a question of whether Aziz will win or lose a seat in Parliament—he must win. His election will surely be dogged by allegations of rigging and his subsequent conduct will be fogged by lack of legitimacy."

Lack of legitimacy is an issue of the future. For the moment, the entire state apparatus has been pressed into service to ensure Aziz and Musharraf are not embarrassed. Rules have been set aside, conventions flouted. In the last general election, the Election Commission had notified that a cabinet minister could contest elections only after he resigns. This rule has been waived for finance minister Aziz. When the Opposition protested to the Election Commission, they were asked to take their grievance to the court. Again, in violation of the convention, Aziz's election campaign was launched from the Prime Minister's House.

They all know Aziz must stick to Musharraf's script. Tehriq-e-Insaf leader and former cricketer Imran Khan is dismissive of the democratic exercise. Says he, "It is a puppet show. The puppets are expected to deliver. When they don't, they are removed unceremoniously like (Mir Zafarullah Khan) Jamali was. It is a mockery of democracy and unless the people of Pakistan have the right to fire and hire, there cannot be any democracy. This keeps the small elite in power rather than the majority of Pakistan's people who are the real owners of this country."

The indefatigable Khan tried to bowl a perfect political outswinger, offering to stand from Attock as the consensus candidate of the Opposition. Khan's offer was exemplary considering the odds stacked against a candidate taking on the might of the Pakistani state. The opportunity, however, has been already frittered away with the PML-N, PPP and MMA fielding their own separate candidates from Attock. Khan justifiably laments, "This was a historic opportunity, and together the MMA and the ARD could have shaken the establishment."

At the crux of Opposition disunity is the schism between the PPP and the MMA. For one, many liberals in the PPP tend to look askance at the MMA's religious ideology. This divide further widened at the time the MMA decided to allow Musharraf to simultaneously hold the two posts of president and chief of the army staff, and also backed the formation of the Natio-nal Security Council. As Senator Farhatullah Babar says, "We cannot field a joint candidate with the MMA because it would legitimise it as an opposition party, which it isn't really."

There has been much speculation on the candidate the PPP will field from Tharparkar in Sindh, which is the home turf of the Bhuttos. Initially, there was a suggestion that the PPP ought to field Benazir's sister, Sanam, from here. Though a resident of London and disinterested in politics, it was thought that Sanam's Bhutto lineage would suffice against Aziz. But Benazir reporte-dly squashed the move, fearing that the family name would be tarnished if the state, as is widely expected, would rig the election. "Our name would be mud if Sanam, say, manages just 10,000 votes," Benazir told the party leaders.

At the time of writing this report, Islamabad was agog with rumours that the court might soon release Benazir's incarcerated husband, Asif Ali Zardari, thereby enabling the PPP to field him against Aziz from Tharparkar—indeed a display of dreamy optimism by those desperate to vanquish Musharraf. With scrutiny of nomination papers slated for July 12, and the last date of withdrawal announced for July 20, it won't be wrong to assume that both Attock and Tharparkar will be witness to a multi-cornered contest.

Yet, these dates haven't dampened the spirit of Pakhtoon Milli Awami Party leader Mehmud Khan Achakzai who is still trying to convince the ARD and the MMA to field a consensus candidate. In the past, Achakzai and Awami National Party leader Esfandyar Wali Khan have been instrumental in forging Opposition unity in moments of constitutional crises. Should Achakzai succeed in convincing the Opposition to field a consensus candidate, others would announce their withdrawal even after July 20, even though the ballot paper will have their names.

But then this isn't the right recipe for defeating Aziz, who began his career as credit officer with Citibank in 1969 and is perhaps today the richest politician in Pakistan. Did we hear you say, Ah, this democracy of the elite!