Chennai-born ex-journalist, on the launch of his much-hyped (and much-paid in advance royalties) debut novel The White Tiger 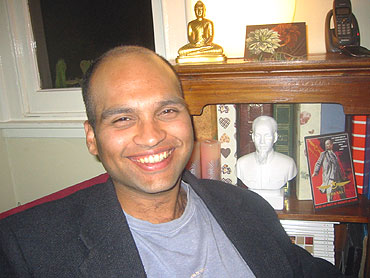 Yes, I wanted to write a book about someone fundamentally unglamorous and poor.

In the form of seven letters he writes to the Chinese premier. Isn’t that a little contrived?

You just betrayed your prejudices. It’s exactly the kind of thinking that the novel addresses.

Isn’t it implausible for a driver to be writing to the Chinese PM, let alone the Indian PM?

It’s perfectly plausible, but the novel is not really in the form of letters but as a series of seven monologues.

Who did you base your protagonist on?

He’s a combination of many people I met at railway stations and bus stops while travelling across India.

Was this while working for Time magazine?

No, it was after I quit my job and decided to take a year off just to travel around India.

You mean after your big advance from publishers here and abroad?

It was before that. I always wanted to be a full-time novelist, so I saved up and quit my journalist’s job.

As a reporter for an international magazine, you would have plenty of opportunity to travel?

On my own I could go to places you don’t go as a journalist, smaller cities and towns.

What did you discover about the other India?

That people may be functionally illiterate but their level of awareness and ignorance about the modern world is startling.

Did you expect your book would start a bidding war among publishers?

I was surprised at how fast things moved. I sent it from Mumbai, didn’t know what to expect.

Your advice to aspiring young novelists?