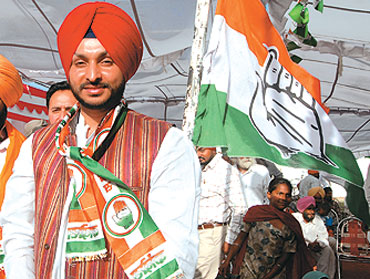 When he moved from Tamil Nadu to Delhi, Manickam subtly transformed himself into Manick, apparently to fit in, like the Krishnas who become Chris when they hit the US. "Tagore" came to him as his Nadar community favours names of nationalist leaders for its children. Despite an odd name, an 'outsider' status (he rose to prominence in Congress youth politics in Delhi, not his home state), a last-minute candidature and a short campaign, Manick Tagore surprised many by making it to the 15th Lok Sabha from Virudhunagar, Tamil Nadu. To get there, he defeated no less a rival than the fiery Vaiko, with his vociferous squads of Tamil nationalist campaigners.

Like 35-year-old Manick, many of the first-time MPs bearing "handpicked by Rahul" tags, almost like ISI certification, are unlikely or offbeat victors. Meenakshi Natarajan, Rahul's down-to-earth, bespectacled and distinctly unglamorous AICC aide, had to play down her Tamil origins in BJP stronghold Mandsaur, and point instead to her (non-political) family's long stint in Ratlam, its neighbour in western Madhya Pradesh. Ashok Tanwar, Youth Congress president, was parachuted into Sirsa in Chautala country because the party did not want to give the ticket to the sitting MP. The son of an army sepoy, he has a small property business, and political pedigree has come his way only through marriage. (Four years ago, Sonia Gandhi played mother hen to facilitate his love marriage with divorced Avantika Maken, the daughter of slain Congressman Lalit Maken, and granddaughter of former President Shankar Dayal Sharma.) Ravneet Singh Bittu has political lineage alright—he is a grandson of the assassinated Punjab chief minister, Beant Singh—but is more your old-style politician's brat with a penchant for fast cars and bikes than the phoren-educated second- and third-generation politicos who hang about Rahul. (In fact, the Akali Dal poked fun at the college dropout with a campaign offering to send "Bittu back to school".) AICC secretary Jitendra Singh, one of Rahul's closest aides, is more in the mould, with his public school education, a good degree and insider status in Alwar, whose royal family he belongs to. But even his campaign there had its share of early hiccups, including persistent rumours that he was reluctant to contest because of poor health. Taken together, they seemed like a tasting menu composed of the old Congress 'umbrella coalition'—the Dalit (Tanwar), the princeling (Jitendra), the young Sikhs (Bittu and Sukwinder Singh Danny), the girl from the old Congresswadi Muslim family (A.B.A. Ghani Khan Choudhary's neice Mausam Noor, fighting from North Malda in West Bengal).... And whether political nobodies risen on sheer merit from the ranks like Tanwar and Natarajan, or sporting dynastic shine, like Bittu, Noor or Jitendra, they caused heartburn among hierarchy-conscious Congresswallahs for being "out-of-turn" recipients of Lok Sabha tickets. But in the end, while some of Rahul's 'babas' did sink (among them, ironically, the textbook 'Rahul candidate', urbane Krishna Byre Gowda from South Bangalore, who was publicly endorsed by Rahul), an impressive number swam to victory. Or, to turn the Akali slogan, Bittu was sent to Parliament instead of school. Clearly, the groundswell of support for the party helped to carry these newbies to success. Their Rahul-derived election spiel also hit the spot with its focus on popular programmes like NREGS and the loan waiver. Young faces helped in situations where battle-hardened and age-lined ones inspired resentment, not respect. Earnest, soft-spoken "didi" Meenakshi, with her inclusive message and promise of "changing the system by becoming part of it", looked good against her 76-year-old BJP rival Laxmi Narayan Pandey, criticised for a poor record despite a long innings as MP. And the 29-year-old Noor, a one-time Supreme Court lawyer, was winsome compared to 72-year-old CPI(M) apparatchik Sailen Sarkar. Being selected through a rare Congress experiment with inner-party democracy like the Youth Congress election in Punjab—a pilot project of Rahul's—was also a plus, though not necessarily a talisman. It was common knowledge that Ravneet's campaign for YC president was conducted against the usual backdrop of muscle and money, but his victory added weight to his LS campaign in Anandpur Saheb. However, for the deserving Sukhwinder Singh Danny, another YC election victor and Rahul baba, it did not work. He lost to a formidable Akali opponent in Faridkot.

Finally, there was the Rahul factor; the VIP lustre that rubbed off onto the candidates from their mentor melted inner-party resentment and worked brilliantly at the hustings for most. Word went around in Sangrur that if Vijay Inder Singla was elected, "he will be made a minister because of his closeness to Rahul baba". IYC chief Tanwar's campaign might have been hackneyed, with him rushing from meeting to meeting in sparkling white kurta-pyjama and matching trainers, getting weighed against laddoos, and dropping praise for Rahul and Sonia. But did it matter when he was a rising star in Rahul's firmament? However, as Rahul's babas are discovering, starry status, even if reflected, comes with high expectations. As from the young man who piped up to ask, as soon as Tanwar finished one of his election speeches: "Will you make an Amethi out of Sirsa?"

A Nice Boy To Know (Really)