A stunning reflection of the central idea of Apu the Everyman, as cre­ated by Bibhutibhushan and limned by Ray. 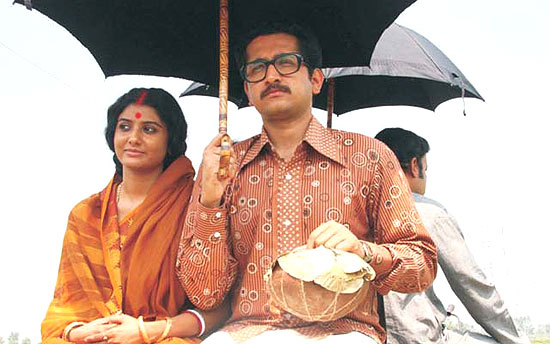 The world knows him as Apu. He is the sprigh­tly, skinny, bright-eyed, shirtless boy from Satyajit Ray’s Pather Panchali, the first of the trilogy based on Bibhutibhushan Bandyopadhyay’s novels. But few know the name of the child actor who played Apu in Pather Panchali. Even fewer know what happened to him.

His name is Subir Banerjee. Kaushik Ganguly’s Apur Panchali chronicles his life. He was just ten when Ray zeroed in on him. Subir was from a family nearly as impoverished as the fictional one he was about to enter. He recalls that, every so often, Ray—whom he called Kaka­babu­­ or uncle—would hand his father envelopes containing hundred rupee notes. There are other striking parallels between his life and Apu’s, which Ganguly tries to highlight using techniques inspired by Ray’s work, and tells parts of the story in black-and-white.

The film takes off from a real-life incident. The German government wants to fly Subir to an event where he would be felicitated along with other child actors from classic films like De Sica’s Bicycle Thieves and  Spie­l­berg’s ET. Only, they don’t know where he lives. They send the invitation to the Satyajit Ray Film and Television Institute in Calcutta and Arko, a student, takes up the responsibil­ity of delivering it. Thus began the search for Apu-Subir.

The elderly Subir finds his life disrupted after being largely ignored and having spent a lifetime making his peace—a precarious one—with the ghost of Apu. It’s at once a source of distinction among acquaintances in an otherwise ‘ordinary’ life as well as a source of discomfort—a stark contrast between iconic imagery of childhood and the utter anonymity of life thereafter. One scene shows a film director shooing away Subir, who is a spectator trying to watch a shooting. The shot being taken involves a child actor. Indeed, when approached by Arko, Banerjee stifles his anger and refuses to admit to being ‘Apu’.

Ganguly creates an interesting ‘myth versus reality’ counterpoint between the stories of Apu and the making of the Apu trilogy on the one hand, and the real life of Subir Banerjee on the other. Apur Panchali consciously emulates Ray’s limpid style while detaching itself from the narrative of his legendary life and work, rather showing him from Subir’s perspective, which is sometimes critical and coloured with a sense of hurt and betrayal.

However, the parallels between Subir’s life and that of the fictional Apu extend even to adulthood. It gives Ganguly a free hand at making his own Panchali. Ganguly juxtaposes key events of Subir’s life, like his fat­her’s illness and his wife’s untimely death with unc­a­nnily similar events from the trilogy. At times this is predictable. What works better is the more straightforward showca­sing of the extraordinary ordinariness of Subir’s life, a stunning reflection of the central idea of Apu the Everyman, as cre­ated by Bibhutibhushan and limned by Ray.