Anyday The Better Half Of The World 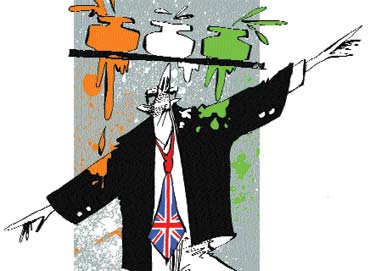 illustration by Sandeep Adhwaryu
Edward Luce January 14, 2008 00:00 IST Anyday The Better Half Of The World

outlookindia.com
-0001-11-30T00:00:00+0553
I do not normally suffer from writer’s block. But when Outlook asked me to write about a "defining India experience" I was stuck for several days. Should it be about my first—albeit very brief—visit to India twenty years ago, backpack slung over my shoulder, and a copy of one or other of Naipaul’s books in hand? Too much of a cliche and nothing very definitive.

Should it be about my second visit to India in 1990 when I came to stay with my then-girlfriend’s family in Teen Murti Lane and then caused a minor scandal when we took a train journey alone to Calcutta? It would have been amusing to relate. A nameless (non-nuclear) relative advised Priya—to whom I am now married—to spend time in a convent. But my normally highly indulgent mother-in-law, Aparna Basu, might not appreciate the reminder.

Or perhaps I should write about the delights and despondencies of being a foreign correspondent in India? Possibly. But it has been done too many times before, not least by me. The same applied to the random mix of epic train journeys, surreal encounters with Anglophilic bureaucrats (yes, there are still a few eccentrics who drink sherry at 6 pm) and occasional samplings of bhang lassi that flitted through my mind as I struggled to unblock it.

Then there was Priya. Try as I might, I could not escape the nagging sense that to select a defining India experience that did not involve her would be disingenuous. On my visits back to India since I left Delhi almost two years ago friends have said to me: "Come back soon." And I have sometimes replied: "Don’t worry, I’m married to India."

It might sound like a joke—and Priya would never say that she was married to England. But there is an undertone of truth to it. Without perhaps consciously meaning to do so, Priya has transferred to me various strands of behaviour that could be described as "Indian". These can be divided into the frivolous and the serious. 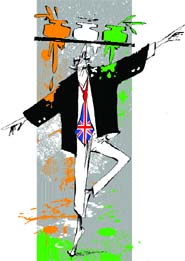 On the former, Priya would strenuously deny that my inadvertent head-wobble comes from her since she denies ever wobbling her head. The jury is still out on this question, in spite of the fact that I have dozens of witnesses. All I can say is that there are times when no other gesture will suffice. When somebody I don’t want ever to see again suggests we meet up very soon, I have no choice but to shake my head. How could I possibly say yes or no?

Priya has also bestowed the gift of dealing effectively with the service industry—a basic tool of survival in India but which in queue-conscious (and self-conscious England) does not come to many people naturally. Whereas once I would accept the wrong order without complaining—and probably tip the offending waiter—I now send it back promptly.

The same applies to travel agents, airlines and hotel managers. So resolute and skilled is Priya at dealing with the service industry bureaucracy that it is rare we do not get a discount, an upgrade, a complimentary dessert or a profound apology. There is one airline we frequently use that upgrades us before we reach the check-in counter. Priya has joined the queue. That is all they need to know.

Whether one ascribes Priya’s unflagging resolve to being from timeless India or the result of growing up in a scarcity-driven rentier economy is immaterial. Some of it has rubbed off onto me. None of which is to imply that Priya is a fierce or merciless individual. Unless you work for an airline and have just bumped her off the next flight, nothing could be further from the truth.

Which brings me to the more serious influences Priya has imparted. When we first met as students at Oxford University, I and many of my fellow liberal arts students were under the strong influence of what we loosely called "relativism". This is the principally French-inspired left-wing school that holds there is no such thing as objective truth in the social world, since what is observed is affected by the observer (unlike in standard physics or chemistry, for example). 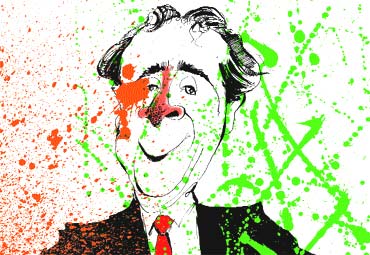 From accepting that there is no such thing as truth, it is a short leap to concluding that development and modernity are artefacts of the post-colonial Western mind that countries like India should avoid. Apart from its obvious logical fallacies (if nothing is true, then how can relativism be true?), and its patronising subtext (the West is always a cause, everywhere else, including India, is an effect), it can lead to endless circularities of thought and the most impenetrable jargon.

Priya helped to snap me out of it. And in so doing she also helped to de-romanticise my view of India and other parts of the world. It is true, there are also some Indians, particularly in academia and in pockets of the ngo community, who are beholden to the most torturous variants of post-colonial studies and for whom everything that happens in India is in fact something that happens to India. Ironically, they are the unwitting victims of another western fad. That Priya helped disabuse me of this youthful mindset was an intellectual gift. Whether it was specifically Indian, or one that simply helped me to approach India more clearly is another matter.

At the other end of the spectrum, Priya also affected my attitude towards family. Being English, I see extended families as a nuisance that are best avoided and at worst tolerated. For Priya, it is the reverse: family is innocent until proven guilty. I can think of one of Priya’s cousins whom she scrupulously avoids since he has developed a taste for Hindutva and is decidedly misogynistic. But he has earned his banishment.

In changing my outlook, Priya has been assisted by almost every one of her relatives that I have met (there are still two or three hundred pending). The warmth and sincerity that I have encountered—"my home is your home", "if you ever need any help..." and my favourite: "I insist you have another gulab jamun"—has profoundly affected my view of life even if my behaviour remains distinctly English. I still see my home as my castle. But I lower the drawbridge more frequently nowadays.

As for love, I will spare Priya the embarrassment of writing about it. Priya may have influenced me in many ways but by this yardstick she is as English as I am.

Edward Luce is Washington bureau chief of the Financial Times, and author of In Spite of the Gods: The Strange Rise of Modern India

When India Was Legible