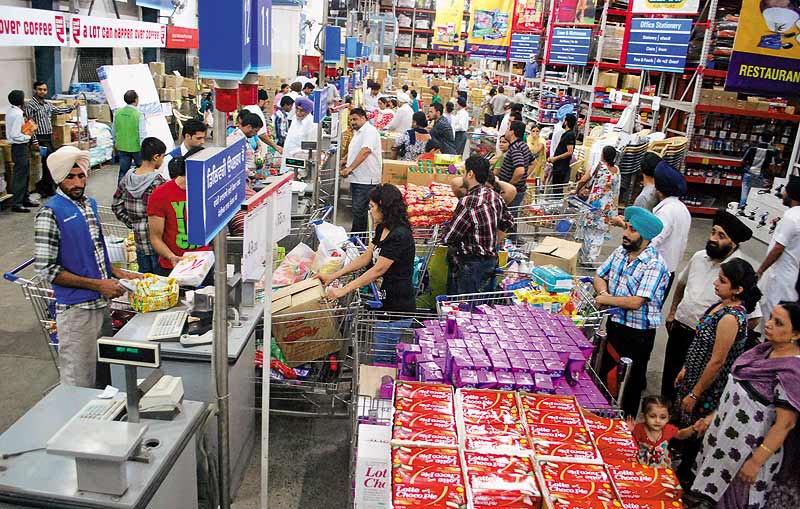 Nothing has bestirred the green acres of Punjab in recent days as much as the Centre’s move on FDI in multi-brand retail. It is fast pitching mainstream farm organisations and progressive farmers against the ruling Akali Dal-BJP government that publicly opposes FDI. But the ruling dispensation—or at least the Akalis, who have a base in rural areas—knows that withstanding pressure from their constituency will not be easy. Signs of a wavering Akali leadership are already visible.

One of the first to pitch for FDI in multi-brand retail has been Ajmer Singh Lakhowal, an Akali supporter who heads the Bharatiya Kisan Union, and the Punjab State Agricultural and Marketing Board. Deviating from his party’s stand, he believes “big MNCs can build agricultural infrastructure in rural areas like cold storage chains”, which will enable farmers to cut wastage and sell more. “We missed the IT revolution due to militancy and there is no major industry in Punjab; we just cannot afford to miss the FDI bus now,” he says. Except left-leaning groups, other farmer organisations too have joined the pro-FDI chorus. 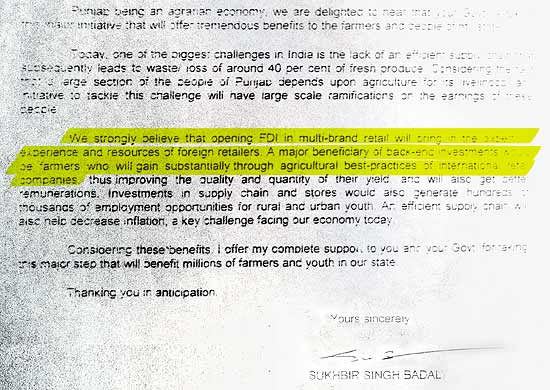 The State Farmer’s Commission also supports the policy. It has been advocating diversification from the paddy-wheat agricultural cycle to pull the state out of its agrarian crisis. “We would expect these companies to pick up the produce directly from the farmers. It will open new opportunities and help them diversify from the existing cycle that is bringing diminishing returns,” G.S. Kalkat, the Commission’s chairman, told Outlook. With newer areas in the country growing foodgrain, Punjab’s output is no longer as indispensable as earlier.

The State Farmer’s Commission, wishing for a change from the paddy-wheat agricultural cycle, supports the FDI policy in retail.

Though there is consensus on the ground and amongst farmers’ organisations, CM Parkash Singh Badal has put the spanner in the works. He declared that as a constituent of the NDA, his government will toe the BJP line that opposes FDI in multi-brand retail. However, his son and deputy CM Sukhbir Singh Badal’s response was more nuanced. “If the UPA involves all stakeholders and evolves a consensus, we can implement it in Punjab,” he said at a recent press conference. That he is being forced to tag along with the NDA against his own instincts is amply clear from the effusive manner in which Sukhbir welcomed the initiative less than a year ago, describing it, in a written communication to the Union minister for commerce, as something that “will be of tremendous benefit to farmers and people of my state”.

Farmers in Punjab have already had a taste of what organised private enterprise can do for agricultural practices. Though initiatives like Pepsico, ITC Mahindra and Reliance Fresh did not make much headway because of inadequate planning and no supporting government policies, the state government did allow Bharti Walmart to enter the market in 2008. The group has five wholesale cash-and-carry ‘Best Price’ stores in five towns, which also supplies the 70 ‘Easyday’ retail outlets of Bharti Retail. Bharti Walmart is permitted to purchase produce directly from the farmers for its wholesale operations, though the state has still to amend its Agricultural Produce Marketing Committee Act for retail trade.

Consequently, the company buys much of its agricultural produce, like vegetables, fruit, spices, food grains, pulses etc, from the northern agrarian states. It has set up a direct farm programme at Malerkotla, near Ludhiana, where farmers are provided with latest varieties of seeds and educated in international crop management techniques and agricultural practices, particularly those that do not result in pesticide residue. Daljit Singh, an agronomist and former employee of Bharti Field Fresh in charge of its contract farming programme in north India, says, “My own experience is that our farmers do not have basic knowledge of international practices, which is why their produce gets rejected. FDI will have a ripple effect because the benefits of conforming to international standards will begin to attract others.”

Presently, Punjab’s rural economy is based on support price structures in traditional rice and wheat, which does not invite much experimentation in other crops due to uncertain marketing. Those advocating the entry of foreign retail feel it can motivate farmers to grow other crops and vegetables once they are assured of remunerative returns and export avenues. Hope for positive change has infected a countryside that is simmering with excitement. The political leadership will ignore it at its own peril.

The Shallow Graves Of Lot