The joint panel may end up as mere formality 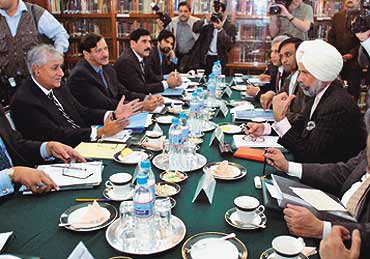 outlookindia.com
-0001-11-30T00:00:00+05:53
The task of putting some real life and purpose into the joint terror mechanism was always going to be as delicate as it was going to be tough. The four-member Indian team, which met its counterpart in the library of the Pakistan foreign office a fortnight ago, knew this. But how delicate became all the more clear when the Pakistani team leader, Tariq Usman Haider, termed the ongoing violence in Kashmir as part of a freedom struggle. "Kashmir se hat jaane se terrorism to khatam hi ho jayega," he opined breezily.

Haider's gratuitous declaration had little bearing on the day's agenda: which was, how to define the ambit of the mechanism and its modus operandi? The Pakistanis argued it should not become an instrument that dug out old cases and gave them a fresh lease of life. The implication: Pakistan would want to limit its scope to new cases arising after last September's Havana summit where the idea of a joint mechanism was mooted. The Indians insisted their understanding was at variance from Pakistan's, but conceded that it might not be appropriate to dredge up some 50 old cases. It was decided to have the mechanism focused on ongoing investigations and those cases where prosecution was under way.

The Pakistani side evinced deep curiosity in the Samjhauta Express blasts. The Indian side, it is learnt, handed over the photograph of a suspect along with passport details and requested Pakistan for information on the man. This man, one Sattar Khan of Lahore, was granted an Indian visa six months ago. Since he did not report to the police, mandatory for all visiting Pakistanis, his name was on the Look Out list. Coincidentally, his picture matched the description provided by Shaukat Rana, whose five children perished in the blasts. Pakistani sources privately maintain that any testimony provided by a person who has suffered such an emotional shock has to be looked at accordingly (read, treated as unreliable), a hint of what may be in store for the mechanism when it meets again.

The Indian side added six more names to the list of persons wanted by India and who are now thought to be in Pakistan. The list was originally 20 in '04, and included underworld don Dawood Ibrahim. It grew to 35 in '06, and with six more names has now ballooned to 41, of whom one has apparently died in the interregnum. Some are even linked to the murder of Gujarat bjp leader Hiren Pandya. The residential addresses of some suspects in Karachi have also been provided to Pakistan.

The nature of Pakistan's response will provide a sense of what the mechanism can achieve. But some clues were already provided in the March 6-7 meet: the Pakistani side responded to some information India had sought in November, when the two sides had announced the setting up of the mechanism. Their response was not encouraging for the future of the process, says a source, adding, "All you can do is to drag a horse to the water. You can't make it drink." Publicly, though, the story will be different—the joint mechanism will meet every three months, even in between if required, and issue encouraging statements on the little progress made.

About the nature of evidence both sides presented in the March meet, another source said: "We have our Inspector Clouseaus and they have theirs. Neither can hit the bull's eye to save their lives." Clouseau is a character, famously played by Peter Sellers, who bumbles his way through murder investigations in the Pink Panther film series.