It was Babri in 1992, a decade later it's a Sufi shrine in the south 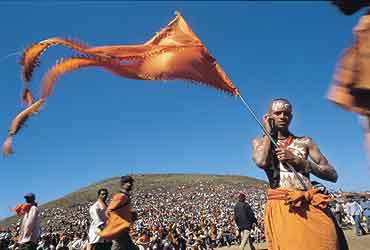 Ironically, the dargah has always been a symbol of communal harmony. It has an interesting blend of rituals and festivities, interweaving Hindu and Muslim. Thousands of pilgrims from all communities turn up at the shrine twice a year—once in December during the Datta Jayanti celebrations and again in February-March for Hayath Meer Qalandar's urs. During the rest of the year, a trickle of devotees come to offer prayers and receive a talisman and sacred ash from the muzavar, the equivalent of a priest, at the shrine.

The BJP's ploy of playing the communal card in Karnataka became official when Union cabinet discard and state unit chief Ananth Kumar disclosed his party's intention of turning the shrine issue into "another Ayodhya" at a press conference in Chikmagalur. Ever since, the parivar and the BJP have been vowing to "repeat Gujarat". A rally was organised as part of the Hindu Viraat Samajothsav in Bangalore which was addressed by a number of seers of various maths in Karnataka and Hindutva's fiery votary, VHP general secretary Praveen Togadia. Similar rallies were organised in Chikmagalur and other parts of Karnataka. The date couldn't have been better—December 6—anniversary of the Babri Masjid demolition.