And Those Years Of Verse

Not a single dull moment. Gulzar sparkles, he muses, and he explains and recites.... And at the end of it, the reader has had an insight into his mind. 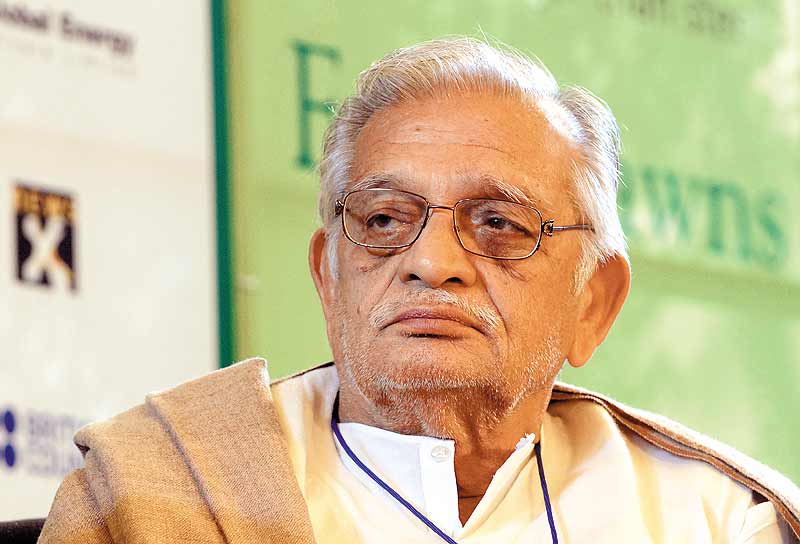 In The Company Of A Poet: Gulzar In Conversation With Nasreen Munni Kabir
Rainlight /Rupa hardbound | Pages: 296 | Rs. 495

A conversation with some other Bollywood personal­ity might have suffered with this format. Nasreen Munni Kabir’s book chooses a straight Q&A format. The interviews have been conducted long distance, through Skype, so there are small indications of mood and reactions, as in when laughter or a smile (or frown) is evoked.

Yet, despite the somewhat disappointing format, the book is a fast, easy read. With Gulzar and his off-beat thought process, there is not a single dull moment. He sparkles, he muses, and he explains and recites.... And at the end of it, the reader has had an insight into his mind.

From questions about his chil­dhood and his father, Kabir leads her subject through his app­roach to poetry, his modus ope­randi as a filmmaker, the reason why he left films to go back to poetry, his relationship with Rakhi and dau­ghter Bosky, and much more. The jou­rney includes tough memories. Firstly, of the Partit­ion, and also of the fact that it took 25 years for Gulzar to stop having nightmares about his experience of those terrible times. Of his stage fright that prevented him from walking up to the stage to simply receive his first Filmfare trophy, though he has climbed that stage over 19 times since. It also inc­ludes his opinion of some of his conte­mporaries in cinema, and of his many translators and those whose work he has himself chosen to translate.

The real gems in the book come from the poet of course, as when he talks about wearing white. Who else but Gulzar could conceivably say that if he wore any other colour “it would feel like a stranger sitting on my shoulder”? Also enlightening are incidents of how in his interaction with directors or producers he was sometimes proved wrong. And sometimes right. Mirroring both his humility in admitting their better judgement, and his own faith in his work, respectively.

To justify the title, there are questions about Gulzar’s method of writing poe­try, where he talks about his imagery, and his attention to phonetics, love of using words in unusual contexts.

While the free-flowing quality of the content speeds up the reading as if it is spent listening to Gulzar speaking, the lack of structure sometimes rankles. An answer gives rise to another question in the mind of the reader, but the interviewer and her subject have moved on to something else by then.

However, Kabir deserves full marks for keeping the flow smooth. Old school journo that she is, she has done her homework thoroughly before embarking on this series of conversations, and it shows in the quality and nature of her questions.

It’s surely not the last word on the multi-face­ted creative person that Gulzar is, yet it’s of significance. Perhaps, it could become one of the texts to cull from, should a real biography of the man be attempted some day.