And Then There Was Ma 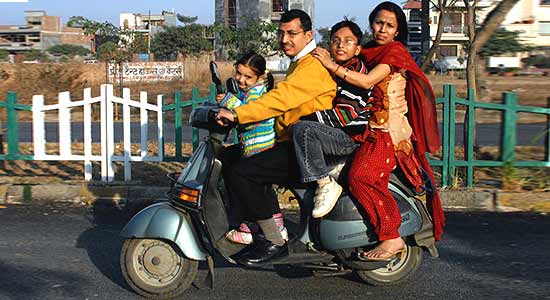 Articles strung together into a book are generally avoidable but Santosh Desai has put together his weekly ‘City City Bang Bang’ columns into a hilarious chronicle of urban India, and the way we Indians have changed over the last decades. Who exactly are ‘we’? Difficult question—Samuel Huntington wrote a monumental book with just that title, and Desai in his last chapters attempts to ask some grand philosophical questions about where India is headed. Apparently only ‘we’ know.

It all began in the era of the scooter—before the Maruti came and created a real middle class. Families shared clothes, letting out trouser hems and letting them in again for their children. The great buy was stainless steel, looking out of the window was television, and entire families went to the hills for the summer, to send a telegram home to say ‘reached safely’. No one looked at nature but went to eat channa bhaturas, get photographed wearing silly hats and to reduce the hill station to everyday Indian chaos.

A little prosperity came slowly. Families moved into quarters designated Type 2 A, 14B/43 of Phase 1. All appliances—a radio, B&W TV, a stereo, refrigerator and mixie—were displayed in the drawing room and the whole neighbourhood dropped in to watch Chitrahaar. Then of course came the Maruti, but first, Hindi movies and serials came into the house through the television and changed everybody—except of course Ma, the ageless Indian mother.

Desai studied matrimonial advertisements over 30 years and notes the shift from boasting about the family to a search for handsome mates, preferably fair. The older ads conveyed mysterious advantages like ‘mother pious lady’ or ‘brother settled in USA’, the alliance being one of families than of a couple. That has changed. The wedding now emphasises sex, sanctioned and fully prepared for, followed by the honeymoon, as decreed, when wooing commences, and husband and wife enact their real roles in private, getting away from ‘the exaggerated respect we accord to a new car, careful not to scratch....’

If we go on as we are doing, when Belvedere and Regency are occupied, who will we be? Not very nice people, says Desai.

Does Bollywood resemble India, or vice versa? The Indian male makes for a case study. The earlier heroes burst into tears, double chins quivering, if jilted. They begged with rich heroines not to go abroad, instead of chasing them. Rescues of heroines in distress were brief, implausible  encounters, and after any trauma, they ran back to Ma. Such males would win in the end, for Ma (like the Force) was with them. Girls were brought up to fulfil the roles of caring sister, wife and mother. They sometimes went astray, the early hint coming when she cut off her long plait, converting it into licentious short hair. The modern hero is different. He has muscles, even cleavage with a shaven chest. But Ma still lurks in the background.

That India of Malgudi and of the engaging, inoffensive Indian is gone. The gearless scooterette gives girls mobility. The TV tells you that without washboard abs, a fast motorbike, or a zippy car with holders for coolers and a coke, you haven’t arrived. The message comes through with plenty of humour, so Indians are still laughing at themselves, sending pink chaddis to Mangalore fundamentalists. If we go on as we are doing, when Ridgewood, Greenwood, Belvedere and Regency are all occupied, who will we be? Not very nice people, seemingly, as the later part of the book implies. Idiots will drive past a waiting queue and block traffic going both ways,  mostly when the police are diverted to close off roads for crummy politicians.

Despair often seeps through Desai’s later chapters. The megalomania surrounding India’s imminent arrival on the world scene demands celebration, or you join foreigners pinning India to the yesterday of snake-charmers and slums.

Desai is the nearest thing to a R.K. Laxman in prose—a chronicler of middle-class India. He answers no social science imponderables, but hundreds of little questions. This chronicle is a diary—of a people—and like a diary written over thirty years, grows into something it never started out to be. As the Economist once noted, ‘Why is the modern view of progress so impoverished’? Desai puts it differently. Why have we ceased to despise vulgarity? At Rs 399, worth buying and laughing over.

Daylight At The Thousand-Star Hotel