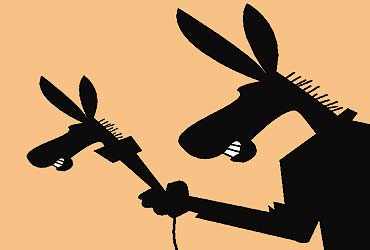 outlookindia.com
-0001-11-30T00:00:00+05:53
Mr Verma has one ambition in life. And that is "to touch the sky keeping my (sic) firmly on earth, as well as to bear out and excel". I'm still not sure what he means but he is quite serious about it because that's what it says in the first line of his CV. Young Indians used to aspire to be doctors or engineers. Now they want to be in TV news. And luckily for them the sign on the door of many channels often says "Experience not required", something any politician will testify to. The former home minister Indrajit Gupta was once doggedly pursued by a young journalist on his way out of Parliament. When he finally agreed to stop for the news crew, he was asked the probing question "Sir, would you please say something". The second question was: "And sir, who are you?"

There are hundreds more people like this being churned out everyday by a new growth industry, the news anchoring course. This is where some poor schmuck pays a large sum of money to do a two-week course which they believe will qualify them for a highly paid job in a TV channel. Everyday I get their CVs, often along with photographs of them pouting provocatively over a computer with brow slightly furrowed to show that they have beauty and brains. And that's just the men. When dodgy qualifications aren't enough, some people offer other incentives for potential employers. One young woman described herself in her CV as being "young and vivacious".

There may be no hard evidence yet of the casting couch being wheeled into the nation's newsrooms. But the scourge of the modern Indian TV channel, the warfornews.blogspot. com is full of accusations of sexual harassment of young women by more senior staff. It's driving the editors of the news channels to distraction because very embarrassing, although unsubstantiated revelations, regularly turn up on the blogs. Managers seem to be discovering that when you take graduates just out of college you often get the antics of graduates just out of college. Amid the more serious claims of sexual harassment are daily reports of sex, drugs, drunkenness, blazing rows and general incompetence amongst the staff of various newsrooms. And when the channel editors send out e-mails demanding that people stop leaking to the blog, those e-mails end up on the site too.

The dumbing down in TV probably wouldn't matter so much if it wasn't for that fact that the news channels are now setting the standards for the whole industry. The editors of good old-fashioned Indian newspapers and magazines, where the standards of journalism are among the best in the world, are looking on in horror. Not only are their own young and inexperienced hacks now asking for huge pay rises but their advertising departments are demanding they cover more and more 'page three' stories. But, unlike the UK, at least 'page three' in India doesn't involve a teenager exposing her breasts for middle-aged men to peruse during their morning tea break. But it does mean more sleazy scandals about the rich and famous. This trend is not surprising when you hear young reporters talking about wanting their first big 'break', not their first big 'scoop'. It's the language of Bollywood and it goes to explain why there are people who think great legs will get them further than great copy.

That's not to say there aren't some very good TV journalists in India and things generally across the networks are improving. The coverage of this month's bombings in Mumbai was much more considered than the last time the city was attacked. Back in August 2003, the TV news channels reported wildly inaccurate figures for the number of blasts and casualties. That provoked fear and then anger as it became clear just how cavalier the TV reporters had been about checking their facts before they went on air.

It's a turbulent time for everyone in the media industry. Competition is cut-throat and things may get worse with some bizarre new broadcasting legislation which critics say amounts to censorship. India is already perhaps the only democratic country in the world which presently prohibits foreign TV journalists from doing live broadcasts on breaking news. Now they simply want to hamstring the domestic channels as well. And if the new legislation scares the media into not tackling difficult stories, the accusations of the dumbing down of TV news will get louder and the young 'talent' will never learn their trade.

The BBC, happily, has been spared that last problem. A friend of mine, who is in marketing, remarked when I told her about Ms "young and vivacious" that the woman "clearly doesn't know the reputation of the BBC in India because it's obvious that you recruit people for their journalist skills". I basked briefly in the reflected glory of the BBC's international reputation for integrity and professionalism until she added, "because most of the BBC correspondents we see are either old or ugly."