Mildly funny, pseudo-feminist, and not in the least offensive 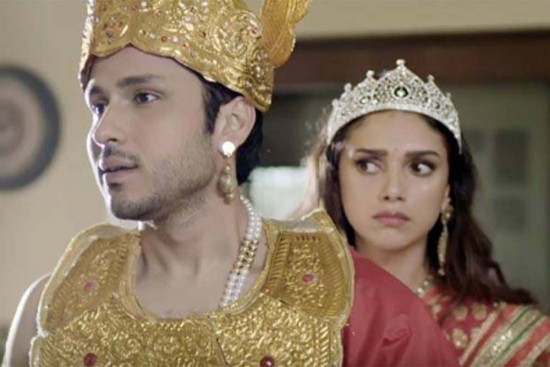 It’s the kind of thing stoned college kids would think up for a college-day skit. But because Akshat Verma has Delhi Belly on his resume, he could get Bollywood actors for Mama’s Boys, a short. It’s a bit of wicked hum­our aimed at the Mahabha­rata, and has angered some Hindu groups.

The characters are dressed in the gilt and plastic of the mythological serials on TV, but otherwise exist in present times. When Arjun (Amol Parashar) wins Draupadi (Aditi Rao Hydari) in the swa­yamwar and brings her home to Mama Kunti (Neena Gupta), she tells him to share whatever it is that he has brought with his brothers without looking up from her cooking. Unlike the Arjun of the epic, the modern-day man protests weakly: “It’s not bhajiya that I can share.” But Mama will have none it.

The point of departure is that Arjun tries to get his bro­thers to turn down the sharing offer—Yud­h­ishtir (Akshay Oberoi) is busy gambling in a seedy den, Bhim (Arunoday Singh) is pumping weights in a gym with a zoned out Hidi­MBA (Teena Singh), while Nakul (Vivaan Shah) and Sah­dev (Jim Sarbh) are giggling gays designing women’s clo­thing. They all have reasons not to refuse—one, Mama is terrifying; two, Draupadi, egged a friend, tries to sed­uce the two elder Pandavas, for she likes the idea of three men. It’s all mildly funny, pseudo-feminist, and not in the least...