An aromatic spice derived from the seed of the St. Lucy’s cherry 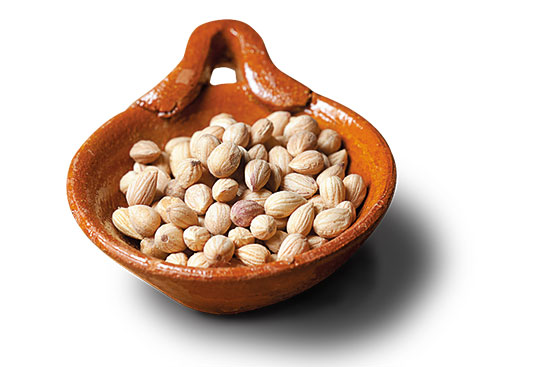 Mahlab or mahleb is an aromatic spice derived from the seed of the St. Lucy’s cherry, found in the Mediterranean region. The spice requires drying and cra­cking of the rock hard cherry pits to extract the seed kernel—5-8 mm in diameter, soft and chewy. It tastes of a mix of sour cherries, bitter alm­o­nds and a hint of rose. When baked, the flavour transforms to rich and fruity, making the spice best with baked items such as breads, cakes and coo­­kies. Mahlab is best when ground before use, as its flav­our dissipates quickly. It pairs well with both milk and che­ese. In Greek-American coo­­king, it is a fla­v­ouring in Christmas cakes and pastry recipes. In Greece, it is used in egg-rich yeast cakes and coo­kies such as Christmas vasilopita and Easter tsoureki bre­­ads. In the Middle East, it is used in scones. In Egypt, powdered mahlab is made into a paste with honey, ses­­a­­me seeds and nuts and eaten as a dessert or a snack.