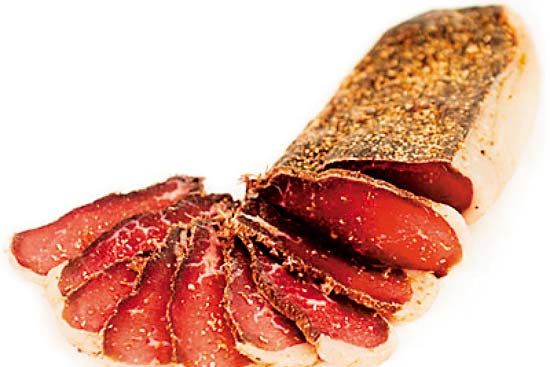 A favourite snack from South Africa for over 400 years, biltong is a mildly spiced and salted air-dried meat. The origin of the delicacy is traced to indigenous people preserving meat by slicing it to strips, curing it with salt and air-drying it. The Europeans changed the curing process to as it is done now. The spices usually used in preparing biltong are rock salt, barbecue spice, coriander, black pepper and brown sugar. The mix is ground together and the meat is smeared with it. The word biltong also has Dutch origins, with ‘bil’ meaning meat buttock and ‘tong’ meaning strips. Bil­tong is now also available in ‘exotic’ flavours like jalapeno, cheese, hot sauce and more. While biltong is usually eaten as a snack, it can be diced up into stews or added to muffins. Africa also has plenty of Biltong-flavoured food, like cheese spreads and chips!

The origins of the Greek kleftiko go back to 19th century Cypriot freedom fighters. To prepare kleftiko—or ‘stolen meat’—in a way it could not be smelt, they baked it in earthenware and left the pot buried.