A must see for all the DVD hacking directors in Bollywood. All because it is so eminently replicable as a Hindi movie. 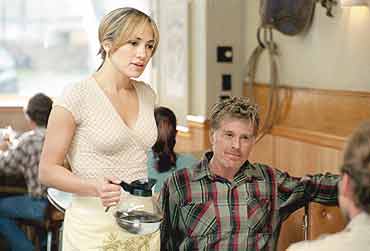 An Unfinished Life is a must see for all the DVD hacking directors in Bollywood. All because it is so eminently replicable as a Hindi movie. Throughout the course of the film, I couldn't resist putting Amitabh Bachchan into Redford's shoes, making Rani Mukherjee stand in for Jennifer Lopez and wondering if Shweta Prasad (of Iqbal fame) would have worked well in the role of J Lo's daughter.

It's the plain and simple storyline, the overarching emotions, the conflict underlying the central relationships and the all's-well-that-ends-well finale which make An Unfinished Life strike such a Bollywoodian chord. Jean (J Lo) runs away from an abusive boyfriend (quite like she did in Enough) to her deceased husband's ranch. Stationed there are her father-in-law Einer (Redford) and his friend and ranch hand Mitch (Freeman) who has been mauled by a bear and is living on morphine injections. From the very start you know that Einer and Jean can't see eye to eye. Einer holds her responsible for his son's death and she, too, has not been able to shrug off the guilt of an unfortunate accident from the past. But slowly they learn to forget and forgive and find peace with each other. Everything about the film is comfortingly predictable, not a single moment leaps out as unexpected and, though high on emotions, it never makes them run deep enough. What could have been an immensely moving statement on guilt and redemption turns out to be very obviously sentimental. Of course, there's an attempt to add some deliberate depth by using the figure of the deadly bear. Mitch wants Einer to set it free, symbolising the need for reconciliation.

Much like Brokeback Mountain, An Unfinished Life too unfolds against the backdrop of small-town, cowboy America. But the rugged ranches of Wyoming here are not even half as profound as in Ang Lee's film. Redford and Freeman try their level best to raise the film above its innate mediocrity, they do strike a nice on-screen rapport but can do little beyond that. J Lo fits well in her tight jeans and sports a beautiful scar around her lips to look tortured and abused. A little bit of acting could have helped her a lot. At a time when the screens are flush with Oscar movies, I'll advise everyone to skip this flick. Catch it later on TV instead.