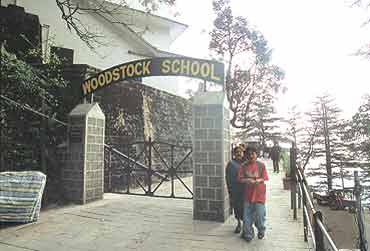 outlookindia.com
-0001-11-30T00:00:00+0553
It was still dark and cold—and close—as I climbed up the hill from the senior boys' hostel to the school gate. Early October it was, and an early, early morning. The brown flannel of the school tracksuit—trimmed so proudly with soft gold—was easy and warm against my legs as they carried me up the hill. I was in my final, 'senior' year at Woodstock, a boarding school in Mussoorie, and off for a training run through the lower Himalaya hills which embrace Woodstock. October was always time for athletics, for a whole series of 'track and field' competitions strung like sporting pearls through the sun-kissed necklace of weekends that adorned the lean, strong neck of that magical month.

The 'necklace' always began with the annual Sports Day, the inter-class competition held at Woodstock's Hanson Field, nestling like a handkerchief of gravel and struggling grass in the lower folds of the hills. Sports Day was full of sun and sunburn, keenly felt rivalries built up through year after year of boarding-school intensity and flashes of athletic brilliance, lighting up the late afternoon shadows with grace and wonder. Sports Day would welcome in October, and the following weekends meant tougher and tougher competition, as inter-class gave way to inter-school at the Mussoorie Olympics, and then the Tri-Meet, where Woodstock took on Wynberg Allen, a local rival, and Doon School, the big boys from Dehra Dun. And then, often over the first weekend of November, were the Dehra Dun District Sports, held at that same famous Doon School—two days of much warmer sunshine on the plains, and much, much faster races.

Like many of my sports-loving class- and school-mates, I competed in most of the events throughout my 12 years at Woodstock—my entire existence, indeed, my entire being, focused around those weekends in October. And, as the years sprinted, jumped and ran by, that final October—in one's senior year—beckoned like mystery, like fulfilment, like the top of a mist-covered peak. Thus, as I made my way, so warm and proud in my brown-and-gold Woodstock tracksuit, up to the school gate to begin my training run, I should have been the happiest schoolboy in the world.

But, sadly, I wasn't. Not even the fact—so dear—that the tracksuit had been passed on to me by Patty Riddle, Woodstock sporting legend beyond compare, could fully ease the pain and frustration inside me. For, as the final October of my sporting fantasy beckoned to me, I had been told by the doctor (with guidance from my parents) not to train for October—not to compete in September's cross-country—as my body was 'run down' by an overload of senior-year and schoolwork and other duties and monsoon basketball and life and just the faintest touches of love and fantasy.

Not to train! Not to run the cross-country, which it was my right to win as a senior, after so many years of dreaming about winning it! Not to fulfil what I had been building up to, through all the seasons and losses and occasional victories, all the guidance and hero-worshipping and amazement! It was as if I had been asked not to breathe, not to see the beauty of the hills! Thus, through the cold, dark mornings of late September and early October, I slipped out of bed at 5 am, slipped into the Woodstock tracksuit, and slipped out of the hostel, to climb to the school gate, and run and run and run along the Tehri Road, until the sun welcomed me home again.

Why do I write of this time, this October, of 37 years ago? Yes, partly to wallow in nostalgia, to feel again, with the sweetest sense of all—the sense of memory—the soft warmth of the flannel and the hard gravel of Tehri Road. But, much more than that, I write of that October because this October, as Woodstock School celebrated 150 years of its special existence, I, along with hundreds of my fellow alumni, returned to Mussoorie, to Woodstock. We came from every corner of India, every corner of the world, to thank Woodstock for all she gave us—the challenges, the defeats, the victories, the wonder, the woes—those strengths, those questions, those occasional answers which have kept us going and going.

For me, those stolen runs in the dark and cold are the most precious of memories—they are the truest of education which Woodstock blessed me with; for others there are music concerts, and plays, and classes, and loves, and special teachers, special dorm-parents; growing and grasping; the hills, the small paths, the high Himalayas, the friendships formed for a lifetime.

We returned—teachers, writers, students, entrepreneurs, strugglers, millionaires, social workers, actors, priests, padres—as people, because Woodstock, our school, gave us so much. Gave us so much and left us wanting so much more.

(Woodstock School has been home to generations of the Alter family including ex-principal Rev Robert Alter, author Stephen Alter and anthropologist Joe Alter.)

What I Really Missed