Amid hints of a saboteur, the RSS puts its weight behind Gadkari 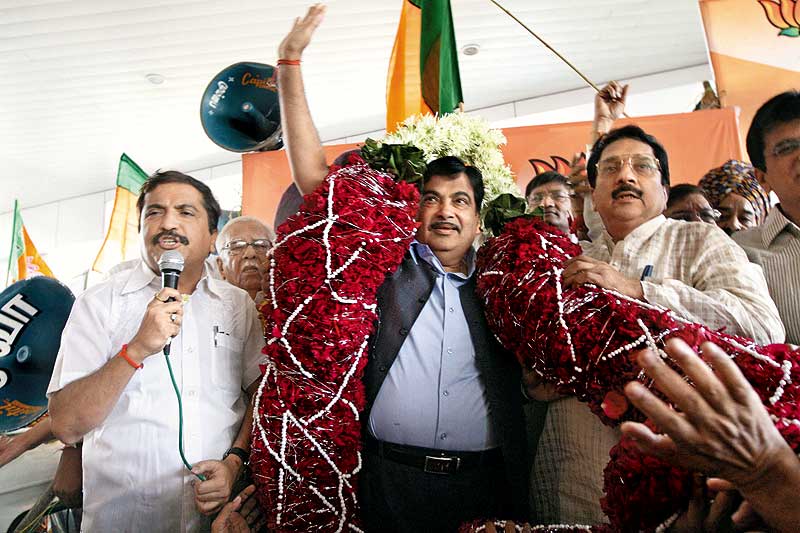 When BJP chief Nitin Gadkari arrived in Mumbai on October 31, the rousing welcome he got from 800-odd partymen gathered there was of a plan, evincing the fact that the RSS had reaffirmed its faith in their man despite the taint. Behind the overt show is a tale of suspicion, intrigue and loyalty that seems to have conferred immunity on Gadkari during bad days.

Just a day before that, Gadkari had cancelled his scheduled trip to Delhi. He released a letter saying that party leaders Arun Jaitley and Dharmendra Pradhan would handle B.S. Yediyurappa’s renewed threat to break away from the saffron party. That done, Gadkari headed for Mumbai, reassured that the RSS is determined to throw its weight behind him. Gadkari’s aggressive defence of himself and challenge to Robert Vadra to face a probe on graft came as the Sangh was getting ready for a spell of confabulations in Chennai from November 2. The three-day all-India executive council in Tamil Nadu is the second biggest annual gathering of Sangh pracharaks attended by all state representatives and the organisation’s top brass.

It is at this meet that the Sangh is likely to reiterate its support to Gadkari to all its pracharaks, as the issue comes up for discussion. A senior pracharak confirms, “Over the past few weeks, the Sangh has made it clear that they stand by Gadkari. That decision is not going to change now. After all, Gadkari is the representative of the RSS in the BJP. Two years back, it was the Sangh that decided to make Gadkari the president of the BJP. Any attack on Gadkari is seen by the RSS as an attack on their own man and therefore an attack on the Sangh itself. The RSS will not accept it.” 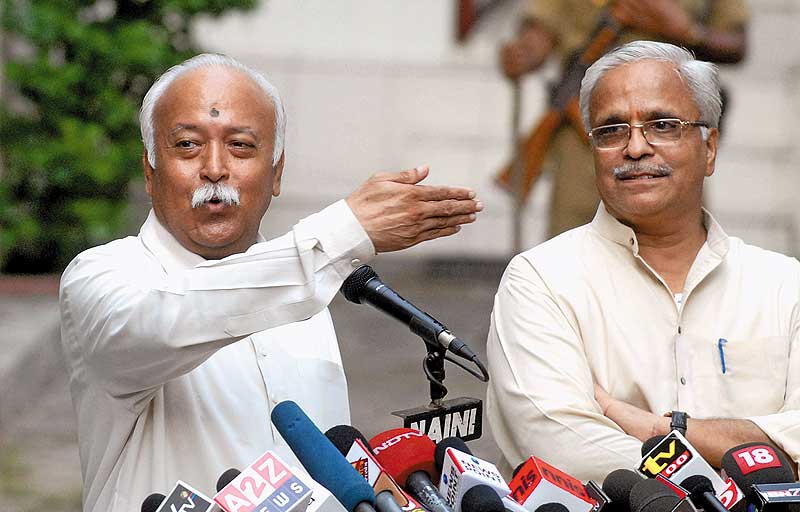 Despite the furore over Gadkari’s dubious business deals, sources confirm that what’s working in the BJP president’s favour is the unflinching support from sarsanghchalak Mohanrao Bhagwat and Bhaiyyaji Joshi. Suresh Soni, who handles the BJP directly, is a fence-sitter. The reason they say is simple: Gadkari is RSS cadre, a Maratha leader who has risen to the post of party president and who, like Bhagwat and Bhaiyyaji Joshi, is a Maharashtrian Brahmin. That’s enough reason for the RSS high command to support Gadkari. Which is perhaps why those at the top are now choosing to describe the charges against Gadkari as “more impropriety and business mismanagement than real corruption”.

The real panic in the Sangh is driven by Modi. He has crushed them in Gujarat; December onward, he eyes a national role.

Speaking about the charges against Gadkari, an RSS heavyweight in Nagpur told Outlook: “Beyond Gadkari’s association with the RSS, the Sangh, over the past few weeks, has been convinced of two things. One, we firmly believe that the Gadkari crisis is an insider job, designed and planned by those in the BJP looking to dent the RSS through Gadkari. Not just that, the top RSS brass has even been briefed about exactly which senior leader in the party could possibly be responsible for the present problem, and we are taking that rather seriously. Two, the charges against Gadkari are a direct result of the age-old, unresolved leadership issue within the BJP resulting in infighting and back-stabbing. The tussle for leadership is being manifested through this particular fight again this time and the RSS knows it.”

In the BJP, not all see Gadkari as damaged goods. There are some who worry about the taint damaging the party in national politics. Yet there is also faction politics being played on this issue. Says a senior leader in the BJP, “The timing is suspect. Look at when this entire revelation has been made. December is when Gadkari completes his term as BJP president. While the party constitution has been tweaked to provide a second term to an incumbent president, Gadkari has still not been named the next president. This scandal brings many aspirants for the president’s post back in business.” Says another sources, “It’s an open field. The aspirations of senior leaders like Sushma Swaraj, Arun Jaitley, Rajnath Singh, Narendra Modi and L.K. Advani are well known. Any discrediting of Nitin Gadkari helps those leaders looking to lead the BJP in 2014 to firm up their claim to the top job, two years from now.”

The real panic in the Sangh and BJP is driven by the Narendra Modi factor. By December-end, his state elections would be over and he would be pushing for a greater national role. He has crushed the RSS in Gujarat and the Sangh certainly does not want him to stamp over them and other leaders in the BJP. It has got too used to backseat driving. It is fundamentally a collegium of old boys who look out for each other and do not want anyone to get too big for their boots.

Not Waiting For ’Em To Hatch