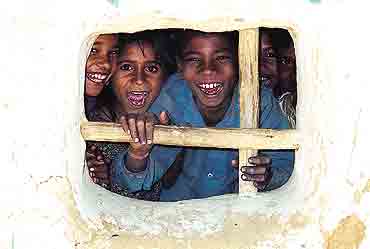 outlookindia.com
-0001-11-30T00:00:00+0553
As places go, it seems an unlikely candidate to be playing host to new ideas. Ghoraval is a small province in Sonebhadra district, the south-eastern outback of UP, with villages scattered like little pockets across an unchanging landscape. There is an abundance of crops, greenery and poverty. The people have small needs and even smaller earnings. Struggling with little or no land to call their own, they have remained as their fathers and forefathers were—poor and exploited.

In this realm of pessimism, and against all odds, a little group called the Children Welfare Society (CWS) began the epical fight to free children from bonded labour in the carpet industry. Rajesh Choubey, CWS project coordinator, talks about the early ’90s when the carpet industry started attracting children from Ghoraval. At the time, children from the Dalit community did not go to school. And the carpets needed to have a fine weave. The loom owners therefore preferred to employ (Dalit) children between the ages of 7 to 14 as they had slim fingers, were obedient and could be made to work longer for lesser pay.

Rajesh explains how the web of circumstances is spun: "These children belonged to really poor families. Their parents would take loans from loom owners and they could never repay. So their children became bonded labourers." In 1995, the CWS did a survey of five villages and found 150 children had a collective loan running into lakhs.

"We called a doctor to examine the children," adds Rajesh. "Many were diagnosed with lung, eye and hand disorders. It was then that we came up with a novel idea. We stuck a chart on the chauraha (village square) showing every child labourer’s name, his work span, what diseases he is suffering from, his debt-trap, how much wage he is getting at present and how much he ought to get as minimum wage."

It worked. Almost immediately, there was a quiet uprising. Several children left the carpet industry and began attending the CWS’s non-formal education (NFE) centres. The hisab do andolan (movement for accountability), as it is referred to in local parlance, became the first milestone for the CWS.

Today, the milestones are aplenty. Then: every Dalit child worked in the carpet industry. Now: only 2 per cent. Then: there were two schools (1997). Now: there are 12 primary, three middle schools, one high school. Then: there were no girls in school. Now: there are more girls than boys. Then: 0 per cent literacy amongst girls in Imlipur village. Now: 75 per cent literacy.

Many happy stories are ripe for the telling. Urmila Kumari studied in an NFE centre and appeared in the open exam for class 8. She stood first in Sonebhadra district. Kismat, 20, is married and has studied till class 8. She teaches Maths and Hindi to the women of Parsia village. She’s also the brain behind the Mahila Bachat Samuha which helps each family save Rs 10 to Rs 40 every month. Kismat, as a CWS worker, earns Rs 250 per month. Subhag Lal is the pradhan of Tendua village. He is the only graduate in Tendua. Lal has been hounding the district administration for a primary school, a pond and a few roads.

The Mahila Mandal of Ghoraval is another example. Amravati and Lakshmi are its voices. Whenever health workers come, the duo makes sure all women and children get immunised. In a state where polio is rampant, no new case has been reported from the 28 villages of Ghoraval.

The Kismats, Lals and Amravatis have made the CWS what it is today. Helming a grassroots movement, trying to restore hope to many a Dalit child whose childhood has been brutally mortgaged. If you want to help, contact: Rajesh Choubey, Children Welfare Society, Post: Rajpur, District Sonebhadra, Uttar Pradesh-231215.