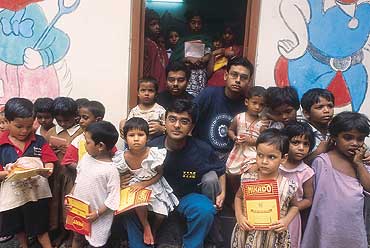 outlookindia.com
-0001-11-30T00:00:00+0553
Long before "corporate social responsibility" became a buzzword in the mid-’90s, Arvind Kumar, an Indian Institute of Management, Calcutta (IIMC) student then, with support from the institute’s professor of sociology Surendra Munshi, started the Initiative for Community Action (INCA). INCA is IIMC’s way of repaying its debt to society. Students try to contribute in solving some of the problems non-profit organisations (NPOS) face by offering free consultancy services for social work projects run by them.

Munshi, the guiding spirit behind INCA, explains, "INCA’s philosophy is service to those who serve others". A symbiotic relationship exists between IIMC’s budding managers and the social worker, the NPOS gain valuable managerial inputs while students gain direct experience of handling consultancy projects in an organisation. npos are usually unable to pay for consultancy services although they are aware that some management inputs and models can improve their service considerably. This is where INCA steps in. Says Munshi, "We offer what we are equipped to offer to those who offer their free services to others. Students get no credit, nor are INCA projects a part of their academic requirements. But all those who have participated have enjoyed the satisfaction of a unique learning experience."

From four projects in its first year in 1998-99 to 20 projects last year, INCA has become the largest society in IIMC. The number of students participating has also risen, from 26 to over 100 last year—a large number of applicants could not be accommodated.

Munshi says, "Along with the students’ enthusiasm, there is a high level of voluntary involvement of the faculty also. Each project is served by a team of four students and has a faculty guide who plays the role of facilitator and mentor, helping in both the practical and theoretical aspects."

The work of INCA is coordinated by a committee of three second-year students who hold office for one year. Munshi is the INCA chairman. The three other current members are Ashwin Kalamkar, Somnath Dasgupta and Kanak Ranjan Ray. Says Ray, "We try to fit the project team to the requirements of the NPO. If a project requires marketing help, a team strong in marketing is assigned to the project."

The work involved is by no means easy. "Each student has to devote a minimum of 30 manhours per project, totalling 120 manhours for a team of four," explains Munshi. He has also ruled that each team will be granted no more than Rs 1,500 for the full project. "Students will have to learn to rough it and share some of the hardships of the less privileged." As a matter of course, students do not receive a certificate after a project is over. The NPO has to certify in writing that the consultancy has been carried out to its satisfaction. The contribution of each team member is also evaluated by the organisation committee. Those who have failed to pull their weight are denied a certificate.

Students applying to INCA are screened carefully, on the basis of their social commitment and team spirit. This year out of 200 applicants only 110 were selected. Says Munshi, "We are also screening npos now, rejecting invitations from those we feel are not up to the mark." Among the projects undertaken by INCA is a study of the Cancer Centre Welfare Home and Research Institute, Calcutta, which involved developing a strategy to enforce a more efficient functioning of the hospital. Some others include a cost-benefit analysis of the SSEI-ODA project (Spastic Society of Eastern India) and an impact assessment of the sexual awareness programmes of Cini-Asha. A long-term sustenance strategy was designed for Vikramshila—an NGO which has been providing training to teachers from other NGOs in the field of non-formal education. Then there was the negotiation framework for Thoughtshop Foundation—on how to market packages. The framework included the legal aspects and pricing of products.

Although the main motivation is social service, there are some career advantages also for the students. Corporate recruiters, particularly consultancy firms, are keen to recruit candidates who are good corporate citizens and have direct exposure to consultancy in an organisation. IIMC is justifiably proud of its INCA initiative, producing not only good managers but also good human beings. To find out more, log on to www.iimcal.ac.in/inca/index.asp