An ex-Test cricketer, a famous club take the game to inner-city youth 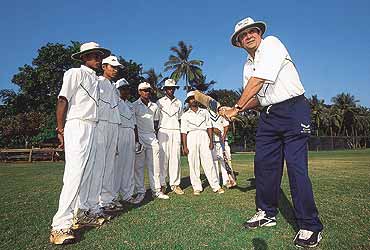 outlookindia.com
-0001-11-30T00:00:00+0553
Nineteen-year-old Nikhil Kanchan would normally be a prime target for the gateman at Bombay Gymkhana, stopped in his tracks with a few pointed questions. The son of a retired bank officer, he’s not exactly part of the exclusive club set. But when Nikhil is in whites, sporting the Bombay Gymkhana Cricket Academy logo, he becomes a special guest on the club’s historic ground that hosted the first ever Test in India, way back in the 1933-34 season against England. Nikhil used to be part of ex-Indian wicketkeeper Chandrakant Pandit’s coaching school. "But I couldn’t afford the fees. It was Rs 10,000 a year," he says. The sweat-drenched boy standing next to him adds, "Now it’s 13,000 bucks." So, when Nikhil heard of the selection trials by the Bombay Gymkhana last June, he knew it was a test he had to pass. The reward—a chance to be coached by former Indian batsman Ashok Mankad, free of cost. Nikhil was among 50 boys chosen by Mankad and is entitled to not just free coaching, but also access to the excellent dressing room facilities, cricket gear, yoga and fitness classes. "I can’t believe my luck," Nikhil says. Sikander Sayyed is another 19-year-old who knows he is fortunate: "The facilities here are amazing."

Most of the boys were selected from the 300-odd who came for the trials and are mostly from financially backward or middle-class families. Mankad says, "These boys don’t have the means to be part of big clubs or even regular coaching classes. There are some 2,500 cricket camps in Bombay if you count all the suburbs. They charge between Rs 4,000 to Rs 10,000 a year, cashing in on the cricket craze among boys. Out of these, only about 20 are run by qualified hands. The rest don’t know what they are talking about. Some camps have more than 400 boys in a single nets. Kids don’t get to bat for two months sometimes."

Mankad is helped by his own former coach, septuagenarian S.P. Bhatia, who focuses on the fitness aspect. Commenting on the cricket coaching scenario in Mumbai, Bhatia says, "Even juicewallahs in some grounds have small coaching classes." It was in this ridiculous scheme of things that Mankad decided to give "clean, intensive, free training to any boy who deserves it". Mankad approached a few clubs with the idea but was not entertained. When he came to Bombay Gymkhana, "they pounced on it", he says.

There were two categories formed during the selection. An under-16 team and an under-19 team. For each division, six batsmen, six medium pacers, six spinners, two wicketkeepers and five reserves were selected. Even as the boys continue to train till the next monsoon starts, they will soon begin travelling to various cities to play matches against other clubs. "These boys will form the nucleus of Bombay Gymkhana’s future club team. It’s a very interesting prospect for them. If they manage to play for the club, they will soon become visible, enough to be picked by other clubs. The sky’s the limit then." Even if it doesn’t reach international proportions, Mankad says they will, at least, find a decent job through cricket. As we speak, four boys from Mankad’s under-19 probables have already been picked for the Gymkhana side set to play against a visiting Australian team. These are the things that excite Mankad today. "I have a lot of time now for such things," he says. He trains the boys from 7-9:30 in the morning and then "they rush off to take care of their education and other things".

Of course, not all the boys selected are hard-pressed. As Vikrant Shetty from the under-19 squad says, "I didn’t join because it was free. I came for the trials because I wanted to be coached here." Mankad is careful about selecting the best and not just the poorest. "But as it turned out, most of the boys who got selected were those who told me that they couldn’t afford the steep rates that coaching camps charge today. They came from far away places like New Bombay and Dahisar." It is the least he can do, he says, in a country where it is increasingly becoming difficult for the low-income group to chase a dream. To find out more, contact Ashok Mankad, Bombay Gymkhana, Mahatma Gandhi Road, Fort, Mumbai 400001. Ph: 22070311-2-3-4

The Heist Is On...And Off