Though anchored in music, this novel is about vanity and greed, revolves around a timelessly topical class. 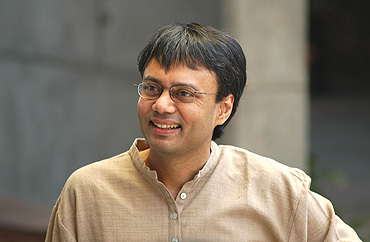 The Immortals
By Amit Chaudhuri
Picador Pages: 405; Rs. 495
The Immortals is a novel about the effects of music on two families across the guru-shishya divide: the venal, squabbling family of Pandit Shyamlal and the rich and insular Senguptas.

Wodehouse used the word ‘shimmer’ to describe Jeeves’ unobtrusive but insistent presence. It is a good word to describe Amit Chaudhuri’s new novel. Through 400-odd pages, it shimmers, without stating its case. The exquisite passages of intelligence that typified this writer’s early pensive novels are present, but are lost in the torpor of his protagonist’s vacant gaze, best summarised in the novel’s last, and snappiest, paragraph: "Nirmalya sighed as he refolded the aerogramme. He sat and looked straight in front of him. Where did this sudden melancholy come from? Was it Pyarelal, or the light outside, or the way in which Shyamji had gone abruptly? Or was it something without history, a dull, buzzing ache which had first announced itself to him during his transformation from a child into a young man, which had no present and immediate cause?"

Nirmalya’s omphalocentric universe trails the ascent of his parents up the corporate ladder. Buoyed on South Bombay’s rarefied air (a perk in itself), the Sengupta menage evolves from the genteel (Kemp’s Corner) through the nervously nouveau riche (Malabar Hill) to casually affluent Cuffe Parade at apogee.

The novel spans Nirmalya’s life from seven to nineteen. Except for facial hair, he is allowed no trace of puberty. "The boy," as Chaudhuri calls him, is goofy beyond belief: "To show her affection (8-year-old Tina) once lifted her dress in front of Nirmalya, and pulled down her panties.... When Nirmalya reported the panty episode to his mother, as if he were relating the charming antics with which all eight-year-olds win over the world, she smiled, but was secretly furious." Which boy would confide it to his mother? And that too with the indulgence of fifty, not the derision of fifteen?

Nirmalya’s existentialist crisis permits an occasional flash of the old Chaudhuri writing with beauty and perception of the boy’s mindscape, of the sea, of his shifting sense of belonging. But all too early, he reins in his natural talent to explore such moments and this tight control truncates the experience, redacting imagination into mere whimsy.

Chaudhuri is more successful in his evocation of Nirmalya’s mother Mallika—Emma Bovary with the sex replaced by music: "She knew she could have been famous; but she had opted for the life of a Managing Director’s wife."

Mallika is perpetually on the verge of being launched as a singer, perpetually in despair knowing her "golden voice" will have few takers. Her unrequited passion is for fame, not music. Spite, not rage, consoles her: "Look at Lata in her white sari, unmarried, living like a hermit in Prabhu Kunj. And Asha, deserted by her husband...this seemed to Mallika Sengupta like no life at all." Not much to savour in this bouquet of regret, when the overwhelming flavour is sour grape.

Enter Pandit Shyamlal and his satellites, bearing a formidable musical heritage; Nirmalya is smitten by classical music. The emotive experience of raga is ignored by the boy (or the writer) for a wordy exposition on art and authorship.

"You can’t sing classical on an empty stomach," Shyamlal explains, when his student berates him for wasting his talents on "light music". Shyamlal, and his family’s instinct for music, remain suspect in the Senguptas’ lofty gaze. They remain an antic bunch, worthy of patronage, but ultimately—subhuman.

The Immortals is not about the experience of music, but about its transactions with vanity, necessity and greed. Convoluted sentences obscure the moment’s luminosity, and a sly malice does duty for wit. The author’s gaze, indulgent, wry, superior, is unknowingly revealing. Nirmalya, accosted in the bylanes of Colaba, registers first the outrage against class. "... she didn’t seem to recognise him or what he was, or at all care: his gentleness, his background, which she could never imagine, his upbringing...."

Past the confusions of music and its commodities, it is class that determines this novel’s trajectory. The lassitude of its narrative keeps The Immortals from being an effective comedy of manners. The reader is left contemplating, with Nirmalya, a dull buzzing ache.

To Prise The Vault Open