Noor Fatima's heart is definitely not a lonely hunter. Host Bangalore and its highly capable doctors ensure that. 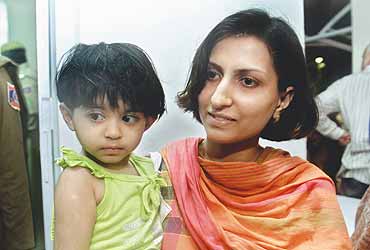 outlookindia.com
-0001-11-30T00:00:00+0553
Ever since two-and-a-half-year-old Noor Fatima crossed over the Wagah border into India on board the Lahore-Delhi bus on July 11, the little girl with the heart condition has captured many a heart across the country. This was evident in the unprecedented outpouring of support for Noor and her family during her successful surgery at Bangalore's Narayana Hrudayalaya Hospital on July 15.

In itself, Noor's condition is not an uncommon one, as one in every 140 babies worldwide is born with a heart defect, according to Dr Devi Prasad Shetty, cardiac surgeon and MD of Narayana Hrudayalaya. The hospital had treated over 55 children from Pakistan for cardiac complications before Noor arrived. Clearly then, it's the manner of her arrival that captured the imagination of thousands of Indians.

Her entry into India through the land route and a short flight to Bangalore was far less arduous than the Pakistan-Dubai-Bangalore round that most anxious parents have been forced to take in the past. Evidence of this was unravelling in Hrudayalaya even as all of Bangalore celebrated the success of Noor's operation: Babbar, a six-month-old infant from Pakistan who had arrived at the hospital three days before Noor—via the West Asia route—succumbed to complications that could have resulted from his far longer journey. The infant developed pneumonia and passed away even before he could be operated on. Noor, consequently, has emerged as a symbol of the possibilities when peace replaces strife in the dysfunctional Indo-Pak relationship.

Says Dr Rajesh Sharma, head of the paediatric cardio-thoracic unit at Hrudayalaya who led the operation team, "Travel does not suit children in this condition. Ideally they should be operated in Pakistan itself. If not, when the destination is Bangalore, they should be able to fly down directly."

For her parents, Tayyeba and Nadeem Sajjad, it has been a long journey. Nadeem, an executive in Lahore, had made a trip to India in December 2001 to check out the hospitals here. It was Nadeem's brother Naeem, a Boston-based nephrologist, who urged them to consult Sharma at Hrudayalaya.

Ever since his stint at Delhi's AIIMS, Sharma has become the paediatric cardiologist of choice, both for parents of children with heart defects and doctors in Karachi and Lahore. Says Sharma, "While I was at AIIMS, a resident surgeon received an informal request from a friend in the US to evaluate a case of a 15-day-old infant from Pakistan who was suffering from transposition of the great arteries." While this was a routine procedure at AIIMS, it was one that Pakistani surgeons were unable to treat. The baby came to Delhi and was successfully operated by Sharma. Since then his reputation as a paediatric cardio-specialist has spread in Pakistan.

Once it was clear that surgery was Noor's only option, the Sajjads started planning their trip to India in May. But the holiday season meant flights to and from Dubai were overbooked. It was around this time that news about the resumption of bus services to Delhi began to circulate. Says Tayyeba, "We were given preference for a seat on the bus because of Noor's condition."

The overwhelming affection that the Sajjads received during their stay in Bangalore came as a pleasant surprise. Says Nadeem, "We were told that people would view us with suspicion and it would be difficult to cope, but there is such a great sense of open-mindedness here, we feel at home though we are 4,500 km away from home." In an emotional gesture, they donated the

Rs 1.4 lakh given by an unnamed donor and Rs 10,000 each from the state government and the Karnataka governor towards treatment of needy children at Hrudayalaya. They have also started a 'Dosti Fund' for Pakistani children who come here for treatment (some Indians too have made contributions).Clearly, the language of the heart speaks loudest of all.