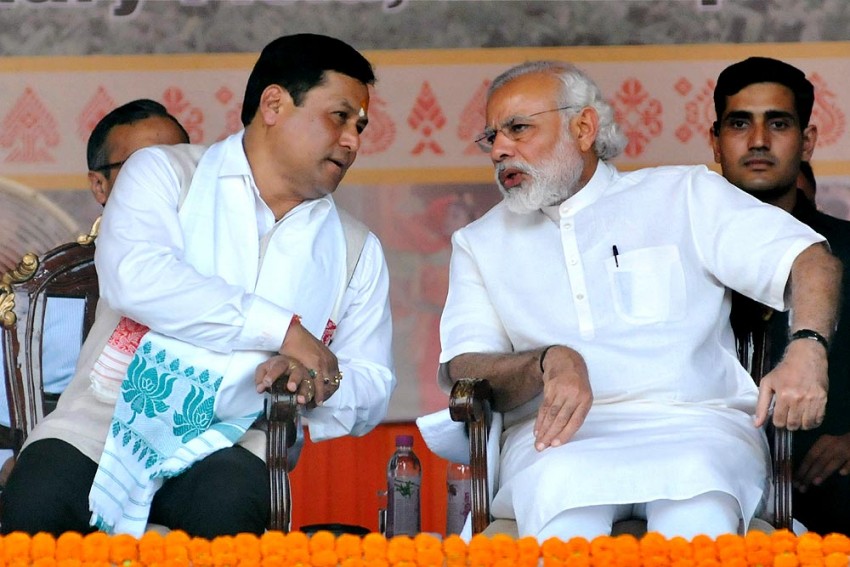 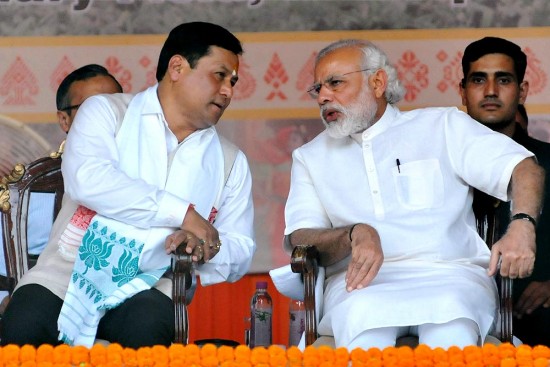 For the Modi government, Assam isn’t an outlier state. It’s a political gateway to the Northeast. That’s why PM Narendra Modi will travel to Guwahati to address the nation on May 26, marking his government’s three years in office. The BJP has an ambitious agenda for Assam. And chief minister Sarbananda Sonowal is the man for the job. Last week, he was darting from one venue to another in tribal-­dominated  Karbi Anglong, launching several projects. Though Assam produces tea and oil, that is yet to translate into commensurate prosperity for the people. Sonowal has been talking of the need to see Assam as a “land of possibility, not problems”. But econo­mic growth is not all that people want. Fears of the Assamese language and culture coming under threat due to the Centre’s Citizenship (Amendment) Bill 2016, which would enable Hindu Bangladeshi immigrants to become citizens, has led to much heat and debate.

Local civil society and tribal leaders have warned of a backlash if the Modi government pushes through the bill, which will enable granting citizenship to immigrants from Pakistan, Bangladesh and Afghanistan, if they are ­Hindu, ­Parsi, Christian, Buddhist or Sikhs. The rationale that people of these faiths could face religious persecution in their home country doesn’t cut much ice in Assam, perhaps because of a long history of agitations against illegal immigrants.

The proposed amendment goes against the Assam Accord, a “Memorandum of Settlement” signed in 1985 by the Centre and the All-Assam Students’ Union (AASU), ending a six-year agitation. Under Clause 6A of the accord, immigrants who entered Assam illegally after midnight of March 24, 1971, are foreigners, who must be deported.

Sonowal, a former AASU president, walks a fine line between yielding to the Centre and a local clamour to throw out all illegal immigrants, Hindu or Muslim. In April, at a meeting with Union home minister Rajnath Singh in Delhi where the Assam CM was also present, AASU leaders demanded the withdrawal of the bill and asked for shoot-at-sight orders  along the Bangladesh border. This is the first time in 12 years that the Centre called such a meeting to follow up on the BJP’s promise of solving the explosive illegal immigration issue. The home minister led another round of talks separately with the All-Bodo Students Union (ABSU), which represents the Bodos, one of largest tribes in Assam, along with the Bodoland People’s Front (BPF)—an ally in the Sonowal government.

Later this month, 29 organisations plan to formulate a joint strategy to oppose the bill, which would make around 1-1.5 lakh Hindus among an estimated 50-55 lakh undocumented immigrants from Bangladesh eligible for citizenship and would also apply to future immigrants.

“The BJP should see the writing on the wall,” says AASU adviser Samujjal Bhattacharya, who participated in the talks with the home ministry. “The Assam Accord was a national commitment. Assam is a small state and we can’t take any more burden of foreigners.”

The citizenship issue has indeed bec­ome the first major hiccup for the BJP in Assam, where its main electoral plank was protection of ‘jati, mati, bheti’ (community, land and hearth). This follows a proposal for a two-child norm, which would bar households with more than two children from government jobs and welfare schemes; holding a ‘Namami Brahmaputra’ festival last month, featuring a Varanasi-style aarti on the river; and  making Sanskrit compulsory up to Class 8 in government schools.

Sonowal’s cabinet colleague Himanta Biswa Sarma has publicly stated that Muslim immigrants, not Hindus, pose a threat to Assam. Talking to Outlook on the sidelines of the BJP’s national executive meet at Bhubaneswar, Orissa, in April, Sarma said the BJP was committed to “see that if Hindus face religious persecution anywhere, they can come and settle in India. It is India’s responsibility to give shelter to them.”

Sonowal, however, says the Assam Accord is sacrosanct and “will be implemented without diluting any of its clau­ses”. “The culture, language and traditions of Assam will be protected... Whatever is required will be done and Clause 6 of the Assam Accord will be implemented,” he says, without explaining how the contradictions between the accord and the bill could be resolved. 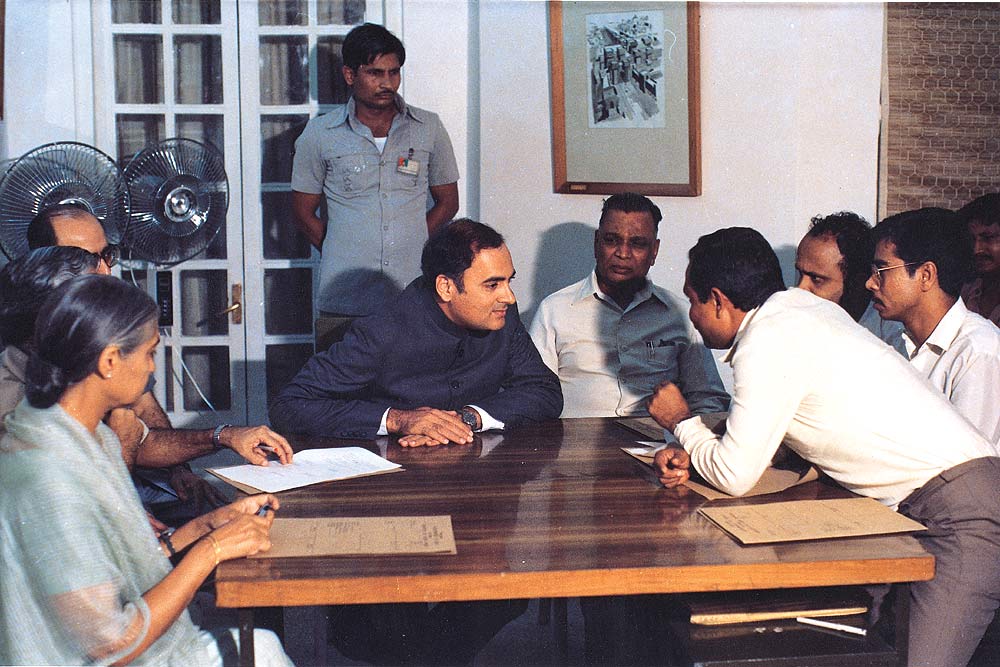 The proposed amendment goes against Clause 6A of the Assam Accord, which was signed in 1985 by the then PM Rajiv Gandhi and representatives of AASU.

Besides strengthening border policing by introducing sensors and other gadgets for better surveillance and a commitment to seal the border—a long-standing demand of AASU—a law to prohibit and “sternly deal with industries, businesses, SMEs or any other agencies employing infiltrators” is also on the anvil.

Meanwhile, Bodo representatives have said that they won’t allow “dumping” of Hindu refugees in the four contiguous districts of Kokrajhar, Udalguri, Chirang and Baksa under the Bodoland Territorial Council, a 46-member elected body under Schedule Six of the Constitution. “Why bring people from Bangladesh to Assam and further destabilise the situation?” asks ABSU president Pramod Bodo, who participated in last month’s talks with Rajnath Singh. “Assam should not be a victim of the Modi government’s international politics.”

It’s not just the Assamese who are unw­illing to make an exception for Hindu ref­ugees. Bhattacharya says the Northeast Students Union (NESU) too has res­olved to oppose the bill.

The situation took a serious turn in March when Bengali Hindus, allegedly backed by Nikhil Bharat, a group claiming to represent Hindu refugees, vandalised AASU’s Silapathar office in Dhemaji district. “This was a major provocation, but we didn’t retaliate,” says Bhattacha­rya. A look-out notice was issued for the Nagpur-based leader of Nikhil Bharat, Subodh Biswas, after the incident caused a furore in the Assam assembly.

Bengali Hindus form a significant section of the electorate in 14 assembly seats in south Asssam’s Barak Valley, besides considerable presence in two seats in Nagaon district—Lumding and Hojai—apart from the Dhubri and Golokganj seats in Dhubri districts. “The BJP had assured us of releasing all Bengali Hindus currently confined in foreigners’ camps or in various jails, and national general secretary Ram Madhav has said that all efforts are being made for it,” says Deba­brata Das, a leader of the Bengali Udbastu Samanvay Samiti, an all-India organisation known to be close to the BJP and fighting for the citizenship rights of displaced Bengali Hindus. “If this demand is not met, then we will launch a full-fledged agitation.” The Silapathar ­incident is a reminder of changed social equations and how the situation can escalate dangerously, while attempts to settle Hindu refugees in Bodo areas could lend grist to the insurgency led by the outlawed National Democratic Front of Bodoland.

Although the Asom Gana Parishad is an ally of the Sonowal government, its leader and former chief minister Prafu­lla Mahanta, one of the signatories of the Assam Accord, has vowed not to allow the Citizenship Act to be amen­ded. “We have already filed a PIL in Gauhati High Court against the bill, which will dilute not just the Assam Accord, but also pose a threat to Assam’s demography, culture and identity,” says Mahanta. He is the chief adviser of the Asom Andolan Sangrami Aikya Mancha, an umbrella body of organisations opposed to the bill. Political observers in the state say the Aikya Mancha is emerging as a platform for a section of the AGP to revive its politics.

From Pebbles To Bullets