Within a fortnight of her taking over, Jayalalitha goes on the rampage with a spate of cases against 'foes' 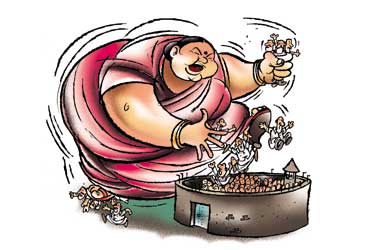 outlookindia.com
-0001-11-30T00:00:00+0553
Late in 1999, at the aiadmk general council meeting at Chennai's Vijaya Sesha Mahal, party general secretary J. Jayalalitha had thundered: "We will capture power in Tamil Nadu once again in the next election. And once that's done, we will pack up Karunanidhi and family and his ministers to jail. He will have to spend the rest of his life in jail."

Two years down the line, her predictions are coming true—fixing Karunanidhi and his family along with top dmk functionaries is her priority. As Tamil Nadu CM, now it is as if she's trying to fulfil the second half of the pledge. Within a fortnight of her taking charge, the crackdown on the dmk seems to have already begun. She made her intentions very clear last week in the state assembly: "We will file a case against Karunanidhi based on the Sarkaria Commission recommendations on the Veeranam scandal." She added that "the Commission had indicted Karunanidhi in the scandal".

She has indeed rattled the Opposition. Half a dozen partymen are always around M.K. Stalin, the dmk president's son and Chennai mayor since 1996. And these are not the usual flunkeys, but "bodyguards". After all with Amma on the rampage, you cannot afford to take chances.

The first signs of the things to come appeared on May 13 when the results of the assembly elections started pouring in, suggesting a landslide victory for the aiadmk. The same day, the overhead feeder cable connections of many Madurai and Coimbatore localities were unceremoniously cut, allegedly by aiadmk men. The connections in both these cities is a monopoly of Sumangali Cable Vision of Dayanidhi Maran, younger son of Union minister Murasoli Maran, who is Karunanidhi's nephew.

The next day, hfo (Hell Freezes Over), a popular discotheque in Chennai, was forced to shut shop by the management of the starred hotel from where it was functioning. Though the hotel management cited "technical problems" as the reason, the message was clear—hfo, once again, is owned by Dayanidhi Maran.

On May 17, three days after Jayalalitha was sworn in, former state assembly deputy speaker, Parithi Ilamvazhuthi was arrested on charges of attempting to murder John Pandian, president of the Tamizhaga Munnetra Kazhagam, an ally of the aiadmk, who had contested against Ilamvazhuthi from the Egmore constituency. The arrest was a sequel to the May 10 violence during polling in one of the booths. Pandian was arrested the same day. But Ilamvazhuthi was arrested on the basis of a complaint filed by Pandian's election agent, John David. This was followed by the arrests of a former dmk MP from Chengalpattu, M. Parasuraman, mla B. Renganathan of the tmc Democratic Front floated by former Union minister P. Chidambaram, and N. Devarajan, dmk treasurer and the sitting deputy leader in the assembly, Arcot N. Veerasamy's brother.

A mere complaint, it seems, is now enough to invite trouble. Take Stalin's case. On May 28, Parasuraman was arrested on charges of kidnapping a civil engineering contractor. According to the police complaint, T.G. Deivasigamani had used Parasuraman to obtain road-laying contracts. These, according to the complaint, were swung in his favour after he gave "commission" to Stalin and the then roads and highways minister, T. Kiruttinan. Deivasigamani claimed that he was "kidnapped" on the night of May 23 by about 10 persons and that his sons, who sought Parasuraman's help, were told that he would be released only if Parasuraman too was paid commission. Based on the complaint, cases were filed against Parasuraman under ipc 365 (kidnapping), 341 (wrongful restraint), 147 (rioting), 148 (rioting with deadly weapons) and 506 (criminal intimidation). The reference to "commissions" was enough for an fir to be filed against Stalin and Kiruttinan under sections 7, 8 and 9 (illegal gratification for an official act or exercising personal influence on public servant) of the Prevention of Corruption Act. But the emerging star on the dmk horizon remains nonchalant. Says Stalin: "These are all trumped-up charges, fabricated as a part of the vendetta of the aiadmk regime. They are simply coercing a few people to file false complaints and using them to frame dmk members. Let them do it. We will face them without running away or hiding behind adjournments or technical objections."

Consider some other instances too: