In my isolated splendour, I plan my great roles in movies. So what if my role in Gatsby was only two minutes long. 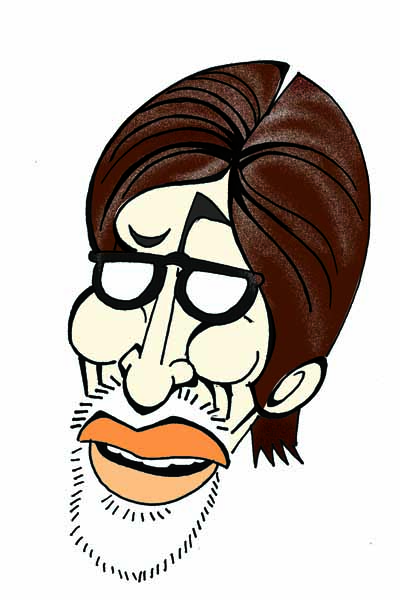 Everyone knows that actors ‘feel’ more than others. Dear Secret Diary, some of your pages are smudged because I cried (real tears, not glycerine) watching the devastated pilgrims on the Kedarnath yatra who were felled by landslides and floods. I even wanted to visit temples and challenge God (my normal routine in films) to protest this injustice. Now some people have suggested that my new bungalow in Juhu should be used to house and take care of the Uttarakhand survivors. This, I feel, is quite unfair. Can’t I buy  one more bungalow without the media making an issue of it?

Dear diary, mine is a growing family and it may expand more in future. Since the people of Juhu are delighted with our existing four bungalows (Prateeksha, Janak, Vatsa, Jalsa),  the fifth one will be a boon to the fans who assemble outside our four bungalows to get my ‘darshan’. Why a fifth, some may ask? Because 5 is my favourite number. The Panch Pandavas are my favourite epic heroes. The five ‘crorepati’ shows raked in the moolah and the next one will pay for the new bungalow. Mind you, the family is growing too. It is now a bungalow each to myself, Jaya, Abhi, Ash and the Baby. There may be more in the future. Abhi and Ash may decide to have more children and I have to make provision for daughter Shweta. My plan is to have eight bungalows in the Juhu Vile-Parle Development scheme (JVPD). The area would then be called ‘Aath Bungalow’ which would eclipse the ‘Seven Bungalows’ in Andheri.

In my isolated splendour, I plan my great roles in movies. So what if my role in Gatsby was only two minutes long. The producers are pushing the Oscar committee to institute another award, ‘the greatest impact in the shortest possible duration’, and my director has told me that I stand a good chance. Besides planning new exciting roles in my new bungalow, I shall chart the course for more exciting ads. Cookies are covered, so are noodles. At my age, ads on the best quality tissue paper and toilet cleaning accessories could be the next.

With five bungalows, I wish the BMC would agree to call our zone the ‘Amitabh Township’. Still, on my own, I am making many changes. Walls separating the bungalows will be broken down and to make it more exciting, tunnels will be dug to link them. You see, The Great Escape is one of my favourite movies and I will move from bungalow to bungalow through these new tunnels. That will be my tribute to Steve McQueen. Security will be a problem and I am asking the CM that only those with special permits be allowed into the township.

One of these days, we will organise a special crorepati show which will be only for contestants who own more than three bungalows. Mumbai’s big builders have all agreed to come onboard as sponsors.