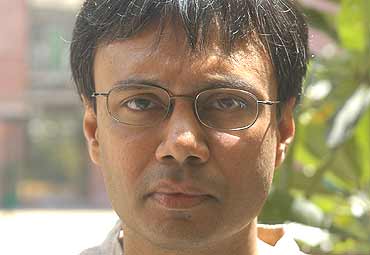 Not in the usual sense. You won’t hear fusion that uses Eric Clapton’s Layla as an entry to a classical raga or vice versa.

As a writer, how do you describe your music? It’s like Marcel Duchamp taking a urinal, turning it upside down and naming it a fountain—it takes things that are already there and puts them in a new context.

So you made a song out of OK Tata and buri nazar wale seen behind a truck?

It had been rattling in my head till one day I decided to write it down. The music came later.

You made a song out of a cheesy poster, too!

Yes, Moral Education is based on charts sold on pavements and sometimes hung in classrooms in municipal schools. Its grammar is perfect for a song, not poem.

Aren’t you worried you won’t be taken seriously by classical Hindustani musicians?

That’s the least of my worries. There comes a time in every musician’s life when a creative avenue opens and it’s stupid not take the path.

Your being a novelist must prevent classical musicians from taking you seriously?
Those who’ve heard my music know it isn’t just a hobby. But I kept it a secret for many years.

How can a jack of such disparate things like music and writing ever be master of either?

There are two ways of looking at it: one is to take all the experience and put it into a novel many years later. The other is to take risks by exploring all possible creative avenues.

So now you can set all your poems to music and perform them?

No, not all poetry has a musical dimension.

Can we expect a more playful, less serious Amit Chaudhuri the writer after this album?

There’s a more playful element now in the book of essays I’m currently working on, but that’s not to say I’m less serious.

Best thing you heard about your album.

A guitarist from Mumbai, Floyd, came up after the concert and said: This is fusion.

A Hanging Twice Over...