Unlike the past, Reliance is now eyeing the high stakes of the information superhighway

outlookindia.com
-0001-11-30T00:00:00+0553
During a casual conversation in his chamber one sultry afternoon, Reliance patriarch Dhirubhai Ambani asked a newly-recruited employee what would shape business growth across the seven seas in the new millennium. The employee, knowing Reliance's core competence in oil and gas, replied: "Energy." To which, Ambani's cryptic remark was just two words: "Wrong. Communication." Communication? Yes, said Ambani, the number of households in India which have a television set is far higher than those who have an access to safe drinking water.

This conversation took place about a decade ago, at a time when the country's largest private company remained completely focused on its petrochemical business and tom-tommed how it was building its Jamnagar refinery, one of the world's largest, in record time.

But, then, for years, Reliance did not seem too serious about the business. Its much-hyped foray into the media business petered out. Its satellite telephony project did not take off. In cellular telephony, it focused only on the north-eastern states. On the way, the group also announced ambitious entries into a host of unrelated businesses—biotech, horticulture, ports...and little was heard about these after they were announced. Sceptical observers put it down to the Ambanis quoting big numbers just to pre-emptively scare off potential competitors. But, in the last few months, as the Reliance behemoth started laying fibre optic cables all over the country at a feverish pace—30,000 people constructing a massive network—many sat up and took notice. The Reliance Infocom dream is pure Ambaniesque grandiose: To set up an optic fibre backbone across the length and breadth of the country, offering every possible communication service, and then some.

"We will be playing a leader's role in the creation of a world-class digital infrastructure in India which will pave the way for rapid economic growth in the country and transform the dream of generating revenues from IT-enabled services into reality," says managing director Anil Ambani. "We will achieve this by leveraging the knowledge and expertise developed in setting up our world-class manufacturing complexes, to create nationwide all optic, broadband networks with terrabit capacity, which will serve as the lifeline for the Indian infocom industry." 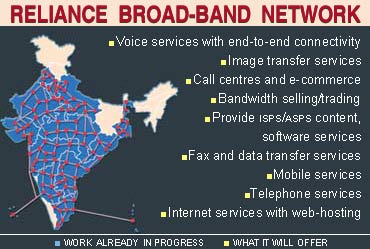 What is the big picture? Simple: if India ever has an information superhighway, Reliance wants to be the one to set it up and run it. The arithmetic currently is this: 60,000 km of cables snaking across almost every major state, covering 115 cities and towns of the country, which account for over 50 per cent of India's gdp. Investment: Rs 10,000 crore. Target date for completion: November 2002. Once the network is in place, it can be used for piping in any kind of data—text (for instance, e-mail), voice (telephony, radio) and image (pictures, television, films). The network could be used for hosting websites, to set up internet data centres and for running call centres.

Reliance Infocom will be the holding company for a slew of companies that may have other partners, depending on the area of operation. Work on setting up the broadband network is currently on in 12 states (Tamil Nadu, Andhra Pradesh, Karnataka, West Bengal, Orissa, Gujarat, Rajasthan, Maharashtra, Delhi, Haryana, Uttar Pradesh, Madhya Pradesh). In Tamil Nadu, the company is already working on the next phase, a Rs 400-crore project to set up 1,000 Community Internet Centres (cics) with about 35 terminals in each. Some insiders claim that the final target, fashioned by Dhirubhai's elder son Mukesh, is to set up 10,000 cics in each state.The group has also signed two joint ventures with the governments of Madhya Pradesh and Uttar Pradesh. In MP, nearly 8,000 electronic information centres would be set up in collaboration with the Madhya Pradesh Industrial Development Corporation, while in UP, its subsidiary, UP Networks, will set up—along with the state government—a 4,000 km optic fibre network across the state and provide isp services to 10,000 information kiosks. The projects are expected to be completed over the next two years. In Mumbai, the Reliance network will have easy access to bses' network, since the group holds a 26.68 per cent stake in it. bses has already rolled out a Rs 300-crore mega investment plan under which it has set up 200 km fibre optic network over a 1,400 sq km area, connecting all its 40 receiving stations. In the next phase, another 800 km of fibre optic will be laid to link all the city's sub-stations. Through this network, subscribers will be able to download data at speeds as high as 2 mbps.

Obviously, once the network is in place, Reliance wants to become a broadband isp (internet service provider), which will also, in addition to giving access to the net, provide content. Here the group is betting on convergence technologies which will make the TV and the computer and the telephone and the fax machine indistinguishable from one another. The content end will be handled by Reliance Entertainment, run by former Plus Channel head Amit Khanna and former Sri Adhikari Brothers executive Rakesh Sapru. Content would include interactive television, video on demand, gaming and other high-speed internet entertainment.

Can the group pull this one off? "The competitive landscape appears to be devoid of any other player with such integrated plans," says Ridham Desai, research head of Morgan Stanley Dean Witter. "We believe that Reliance is well-placed to successfully execute this investment plan given its track record in implementing complex projects." Agrees Jyotivardhan Jaipuria, head of research at Merrill Lynch, citing Reliance's "comprehensive strategy across the entire information and communication spectrum." Says he: "Our assessment of valuation attributable to the infocom foray is conservatively placed at between $3.1 and 6.2 billion (Rs 14,000-28,000 crore)." That's a lot of valuation.

But how does all this fit in with the Reliance oil and gas businesses? Its telecom foray, if the project comes off as planned, will de-risk the group's business profile. "In the long term we believe this is likely to lead to a sustainable increase in valuations as investors are buying into a globally competitive petrochemical company with exposure to a telecom play in one of the fastest growing markets in the world," says Jaipuria. In other words, if the infocom plan turns into reality, the whole of Reliance will be much larger than the sum of its parts.