Iranis, the intangible heritage of Mumbai, are gradually fading into the sunset 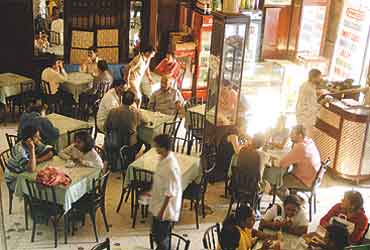 outlookindia.com
-0001-11-30T00:00:00+0553
For the 999th time, you negotiate the well-worn marble steps, walk across the old mosaic and marble patterned floor, choose your favourite mahogany marble-top or chequered-cloth glasstop table, look around the wood-panelled and mirrored walls, choose a feather-light wooden chair and survey the place. A familiar set of eyes greet yours, almost as if he was expecting you. He knows what to bring—a piping hot chai in a once-white, gold-rimmed, now-chipped cup and saucer with a brun-maska or gutli pao. If you are in an indulgent mood, he follows your gaze to the bhatti-fresh mawa cake counter and brings you one. Or asks if he can get you a double egg masala omelette with extra chillies. Eat, drink, chat, study, make plans, weep, reflect upon life or merely watch the passers-by on the pavement outside. The bill, when it comes, doesn't burn a hole in the pocket even in these expensive times. When, after considerable length of time, you walk out, it's always to return.

Coming to an Irani restaurant (or cafe or hotel) in Mumbai is a bit like slipping under a security blanket. It's a personal comfort zone, a shared yet peculiarly personal space. It's not only the bun and chai that one returns for (never, never ask for a coffee here), because multifarious fusion versions of bread and tea are there for the asking at every street corner in Mumbai today. An Irani is different. You go for reasons other than the purely functional one. So, each time an Irani brings down its shutters for good, it's time for silent tears on the pillow. Seeing an Irani pass into the annals of time is like losing a home away from home. Some favourite ones went in the '80s, others reinvented themselves. Bombay became Mumbai. Then, a few more passed into history. The hopelessly nostalgic souls lamented the Death of the Irani as if it were a soulmate. Then, many of those who lamented also passed away.

Now, the last few Iranis are standing, a handful of them reminding the city of a legacy it's losing. Just a handful where hundreds of them existed and flourished, from the southernmost one in Colaba to far north in Jogeshwari with evocative or self-explanatory names—Firdausi (after the great Iranian Sufi poet), Sassani, Bastani, Kyani, Yazdani (after ancient Iranian dynasties), Light of Iran, Light of Asia, Star of Persia, Khoda-e-noor, Kohinoor, or George, Leopold, Edward, Piccadilly, Churchill with the obvious Raj influence or the more mundane Paradise, Miracle, Sunshine, Stadium.

Leopold is Irani only in its decor, Cafe Paradise outside Dadar station is now a typical Udipi joint, of the twins at Andheri only Ideal has held steadfast while Miracle has morphed into McDonald's, much like New Empire at VT (okay, Chhatrapati Shivaji Terminus) did in the last decade. At the bustling Dhobi Talao near Metro, Bastani shut shop a couple of years ago while Brabourne is fumbling. The 100-year-old Kyani is holding steady, so far. Metro itself—the famous red carpet theatre for Bollywood premieres—has closed down to make way for a multiplex.

Till the 1850s, Bombay had no hotels worth the name other than a few taverns. Around the mid-19th century, the city saw the first few Parsi-owned hotels and bakeries, followed by some Muslim-owned ones. The Hindus had their khanavals in the textile mill area. The Gazetteer of Bombay mentions 1,400 bakeries at one time, roughly one-third were the true blue-blood Parsi-owned Irani cafes. "I am for tradition, it hurts somewhere to see so many Iranis shutting down," says Farhad Ostavari, fourth-generation, part-owner and part-manager of Kyani, "but we have to move with the times. We have to find ways to bringing people in."

That's the mantra—those that have changed, however subtly, have had a chance of survival. Moving with the times at Kyani means introducing the Jain birthday cake, a hot favourite among wealthy local customers but unthinkable for Ostavari's uncle, the 75-year-old Aflatoon Shokri, whose father Khodaram started the tea-shop with a partner and a samovar in 1904. "It's the younger generation, they were qualified and went back to Iran or the US for well-paying jobs," he says of the many that shut shop.

The Army Restaurant at Kala Ghoda started serving Chinese, rather Indian-Chinese cuisine along with brun-maska to keep the new clientele coming in. Stadium Restaurant at Churchgate refurbished its defunct mezzanine floor—in most Iranis, the mezzanine was meant for "Ladies and Families"—for a cybercafe that attracts youngsters into the old world place. "It helps to have a cybercafe," says Javad Chaman, part-owner and architect. Like others of his generation, he has a trusted man at the counter even as he pursues his profession. Most Iranis that passed away either had squabbling owners or did not have enterprising fourth-generationers and did not adapt.

Still, some things don't change. The wood fire, for example, still drives the bakeries. The "original recipe" that made each bakery-restaurant's fare differently delectable still survives, handed down from one master baker to the next. At Yazdani, the ageing Zend Merwan Zend will not allow use of readymade yeast, he would rather use khamir that takes three times as long to ferment but leaves the bread with a sweet-sour smell that fills the restaurant every morning; it also helps preserve the bread for days without preservatives. His old clientele send their drivers while the multitude of offices at Flora Fountain provides him with some new and regular faces. At Kyani, actor-producer Shashi Kapoor no longer comes but sends his driver for cakes. The legendary M.F. Husain still drops by once in a while, for chai and brun-maska.

"The Iranis are very much a part of the city's heritage," says local historian-writer Sharada Dwivedi, co-author of Bombay, The Cities Within, "I have read that many of them used to have codes, the waiters would shout for a gulabi single or safed teen. Those were colours of the cutlery, one for the Hindus and the other for Muslims. There has to be a way of keeping the existing ones going." It's a statement that Ostavari would love to follow up on.

He's not alone in that sentiment, because Mumbai's Irani restaurants are reminiscent of a bygone era in the city's history. And it's not clear if they have what it takes to survive the brutal competition they face from street food, convenience and fast food and an ever-growing range of restaurants serving cuisines from all over India and the world. Irani restaurants are part of what reputed anthropologist Prof Arjun Appadurai called "Mumbai's intangible heritage". That some still exist is a happy coincidence, that the last of them might soon become history is a frightening thought. The mahogany marble-top tables and the cake moulds will perhaps find antique lovers but where will the Irani chai—and gutli pao—lovers go?