Along The Heart's Flow Chart 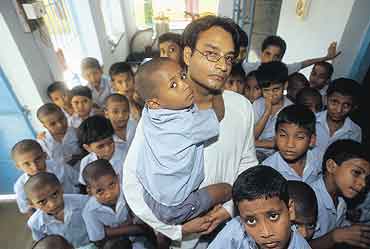 outlookindia.com
-0001-11-30T00:00:00+0553
Vinayak Lohani, 26, always knew boardroom brainstorms were not his cup of tea. In fact, long before campus recruitment began at the Indian Institute of Management, Joka, he had found his true calling—educating and sheltering abandoned street children. Today, living in a rural suburb of Behala in southwest Calcutta, barefoot and dressed in white kurta pyjama, Lohani has at last given flight to his dreams. Just four months ago, he launched the Parivar Education Society which is already home to some 55 young boys and girls.

Many of them hail from the red-light areas of north Calcutta, Sealdah railway station, south Calcutta and Canning. Some do not know their parents, others have sex workers for mothers who have no support from their fathers. Parivar plans to take at least 500 such cases under its roof.

Other NGOs like Sankalp and Child in Need Institute (CINI) help Parivar locate abandoned children. Authorities at the iim are also doing their best to chip in. Says a spokesperson, "There are known red-light pockets in Calcutta like Sonagachi and Kalighat. Securing the consent of the children’s guardians, if any, is not a problem really: they’re quasi-orphans, mostly on their own from an early age." Of course, getting kids under their umbrella is hardly the end of the problem—setting a long-term module for rehabilitation is the real issue. Parivar members face questions on this almost everyday and they themselves are unsure about the future.

The fledgling organisation has already faced rough times. Recalls John Das, Lohani’s deputy, "The very first week, with just five children, food nearly ran out. We were worried about procuring paddy and wheat. There was no way out but to borrow locally. Eventually, some donations came in and we were afloat again."

The yellow-coated Parivar building which houses the school is rented at Rs 12,000 per month. Vinayak and his seven-member staff, including teachers and helps, have their work cut out to make ends meet. But that has not dampened the spirit inside the building. A low hum of children seated in classrooms greets the visitor. You can see the bright smiles of Somnath, Sanjana, Susmita and Feroze. Maths is being taught. In another room, seven other children are asleep!

As the frail Vinayak and Das relate their story, you can sense their commitment. You wonder what moved him to give up a glittering career for social service. The self-effacing Vinayak, also an alumnus of iit Kharagpur, makes it sound all too natural. "I never felt at home in the iim ambience. Something was lacking—I could visualise my career 25-30 years on. I realised it would be a lifetime of counting how many chocolates, radios, or soaps I have sold, how much business I’ve secured, manipulating, compromising and planning strategies. This was not for me. Doesn’t mean I’m running down others," says Vinayak. You can feel a deep sense of peace within him.

No Mercy In Hell's Kitchens