Alone In The Crowd

For all those who ceaselessly chased the euphoria of protean identities in a world where the celebratory spirits of the great global village flowed like water, September 11 was a day never to be forgotten. 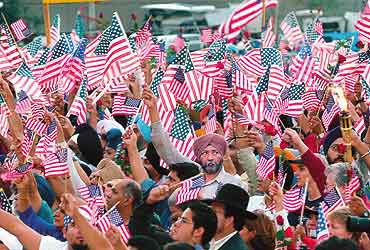 outlookindia.com
-0001-11-30T00:00:00+0553
For, it was on this day that all their cherished illusions were blown to smithereens. Not only did the twin towers of the World Trade Center come down, with it also collapsed the capacity of Asian minorities in the West, particularly the US, to don various hats with great ease. It just took a couple of dastardly terrorist strikes in the free world to explode the myth of a democratic globalism free of all trappings of national, social or cultural identity. Contrary to what the honchos inhabiting the top rungs of power in the US would have us believe, racist stereotyping is back in fashion. Asians of all nationalities have been clubbed together under the worrying and hold-all category of the Other—or those who belong to the stock of Osama bin Laden—and subjected to hatred.

What's perturbing is that this sentiment, always present as undercurrent, has surfaced as violent action. It claimed its first victim on September 15 when Balbir Singh Sodhi, a Sikh who had recently bought a gas station in Mesa, Arizona, was shot dead. Says his brother Lakhwinder: "The guys who were landscaping the gas station called out to him to say they'd finished. Balbir came out to inspect and somebody came in a pick-up truck and shot him thrice."

Sodhi, like so many other Sikhs in the US, was mistaken for a Taliban follower because of his pagri and beard, testifying to the ignorance of Americans about the varying identities that comprise the social and cultural mosaic of Asia. Agrees Lakhwinder: "These people don't recognise us. If my brother hadn't been wearing the pagri, he would have been alive."

Sikhs aren't the only Asian social group to have been targeted. In Hayward, California, Naseem Akbar, 51, an Afghan who hawks from a vendor cart outside the town's railway station, was accosted by two men. Their questions reflect the confusion and hatred sweeping the country.

"Are you a Palestinian?" one of the young men asked.

"Are you from Afghanistan?"

"No, you are telling lies," declared the two guys, who minutes ago had bought burritos from him. They punched him in the neck and threw some food at him. Says his wife Massuda: "The incident really shook my husband." But the couple are reluctant to report the incident to police, as they fear further retaliation.

The backlash is particularly bad in the San Francisco Bay area, which has a large concentration of Afghans. The tide of hatred, indeed, has swept the entire country—and bewildered Asians are anxious about their safety. "Some Indian companies are even asking their employees to shave off their beards," says Sukumari Rao, 30, of Pittsburgh. In this atmosphere thick with fear, talk that the Indian embassy had asked Indian women to use the bindi—to identify themselves as not Arab or Afghan—got around fast. The embassy, of course, denies it ever issued any such directive.

Adds Dr Amardeep Singh, of Lehigh University, Bethleham, Pennsylvania, who is helping American students deal with the tragedy: "Many of them are from New York City and some have lost family members. I find myself counselling them even as I am confronting glares, shouts from people and people demonstrating their middle fingers."

What has goaded Americans to turn against Asians? Is it a freshly implanted mistrust? Answers Sin Yen Ling, a fellow at the Asian-American Legal Defense Organization, New York: "They are resurrecting the old anti-immigrant and anti-foreign sentiment. Latinos too are being victimised. Incidents against East Asians, the Japanese and the Chinese, are also occurring because of the repeated references (in the media) to Pearl Harbour. In 1999, fbi reported 55 hate crimes against South Asians across the country. In the last one week that number has tripled."

The media too has inadvertently played a role in what is looking increasingly like a backlash from certain excitable sections of wasp America. Says Prof Sreenathan Sreenivasan of Columbia University: "They see pictures of the wtc, followed by pictures of Osama bin Laden on TV. And we have become the enemy since we look the same."

Equally important is the insular attitude of the average American, ignorant as he is about different cultures. Says Rafiq Dossani, senior research scholar at the Asia Pacific Research Center, Stanford University: "The uneducated (all of whom have presumably studied world history and cultures at High School) recognise only skin colour and, probably, mix Asian and Arab features and don't know whether a name, say, Mohan, is Muslim or not."

New York's cosmopolitanism is no protection against the surge of ill-feeling against people who are neither white nor black. Says Yen Ling, whose organisation is monitoring attacks against minorities: "I am speechless, many of the crimes are around New York. There is nobody out there in the midwest and the southwest to follow the hate crimes...and that is where these grave incidents are taking place."

Fear has gripped fresh Asian migrants because they haven't had much experience of encountering racism. Says Sagarika Ray from Berkeley, California: "All of a sudden the colour of my skin has come into play and people are questioning my patriotism." Sreenivasan attests to an air of increasing tension. "We have never seen anything like this happening to the South Asian community. We have not been prepared for anything like this. There is panic and fear. And rumours and misinformation have been fanning this fear," he says.

What recent South Asian immigrants, revelling in their newfound status and profile post the software boom, have little memory of is the fact that racist crimes against them were a reality till as recently as the late '80s. Recall the Dotbusters, a gang that earned infamy by brutalising Indians—the 'dot' is the bindi that marked them out.

The sheer scale of attacks against minorities has belatedly prodded the administration into action. Community and religious leaders have pitched in to help the authorities. President Bush—whose own intemperate remarks could have fanned the rancour against Asians—made it a point to make elaborate amends by visiting mosques to allay the fears of Muslims.

San Francisco, like many other cities in the US, held an inter-faith ceremony which was attended by Governor Gray Davis and San Francisco Mayor Willie Brown. And Lt Governor Cruz M. Bustamante told a gathering at the Fremont Gurudwara on September 19, "Freedom of religion is the foundation of the American Constitution.Americans should not attack Americans.... Americans who wear turbans are Americans, and not terrorists. We have zero tolerance policy toward hate crimes."

The embassy and consulates have been taking up the issue of attacks on Indians with the authorities.Says Navtej Sarna of the embassy in Washington: "We are sending a national list of gurudwaras to the state department and asking for more police protection." The Sikhs are in a curious fix of having to be extra demonstrative about their Americanness. "No religion preaches to kill the innocent," says Bhai Saheb Manjit Singh, head priest at the Fremont Gurudwara. "We had akhand path and ardaas for the victims for a week."

In the end, people have no go but to repose faith in the American system. They hope the recent attacks will prove to be aberrations. Says Kamlesh Sharma, an LA-based software engineer: "I believe the American justice system with all its shortcomings will protect South Asians. In such times, emotions fly high and wise ones recognise the risks and act accordingly. We shouldn't start a chain reaction."

Others, however, fear that the worse is yet to come.