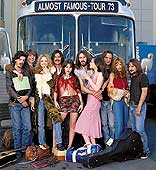 Cameron Crowe's Oscar-winning Almost Famous does a double—it tells the 'coming of age' tale of a 15-year-old rock fan's slow rise to near fame and maturity. But it also presents an ode to the '70s rock and roll scene—the time of transition when the 'war was ending' and the genre was losing its hard-boiled edge.

The movie is Cameron's semi-autobiography, which allows him to come up with some funny sequences. William Miller (Patrick Fugit), a rock fan and writer, is on an assignment from the Rolling Stone magazine to write on the Stillwater, an up and coming (fictionalised for the movie) band of that period. Miller has hidden his age from the magazine's editors; he is also trying to get away from a sensitive but slightly goosey college teacher mother (played by Francis Mcdormand), who wants him to pursue a career in law. The two worlds collide in a classic mix-up when Russell Hammond (Billy Crudup), Stillwater's lead guitarist, as crazy and confused as any '70s rock star, encounters Miller's mom on phone. When she tells him, amongst other things, that 'he still has a chance', the cocky guitarist ends up uttering 'yes m-a-m' in the classic schoolboyish manner. Russell's personal and professional life is also typical of that period—he vacillates from a genuine concern for music to the cheap exhibitionism that finally sounded rock and roll's death-knell. Caught at a young age, in documenting the musicians and their troubled times, Miller ends up striking an emotional bond with Penny Lane (Kate Hudson), the leader of the 'band aids', another phenomena of the period. These were girls, who hung around rock stars for the sake of music, sex and sometimes love. Penny's fate is an archive of the way these nowhere-girls arrived and vanished from the rock and roll scene. It also provides the intensely human angle (Lane is in love with Russell) that lay behind all the madness.

Crowe hints at the politics played by magazines like Rolling Stones and their contribution in rock and roll's decline. But there is a problem, despite the good script (the bitter-sweet moments of hilarious heartache), casting and some sparkling performances. The movie reiterates, in a way, what we already knew about the music scene in the '70s. In a bid to humanise the period, it also ends up softening the impact hard rock had on a generation.