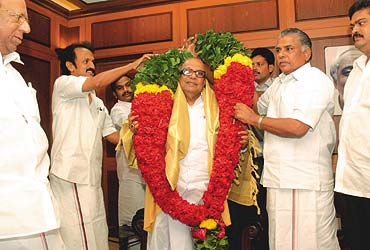 The DPA thus comfortably won five of the six municipal corporations, 110 of the 152 municipalities and 28 of the 29 district panchayats. In Chennai, the DMK-led alliance lost just eight of the 155 wards in the Corporation Council. Besides, the DMK also routinely retained the Madurai Central assembly seat in a byelection.

Alliance arithmetic apart, the fact that 83-year-old CM M. Karunanidhi has delivered strongly on his poll promises has gone down well with the electorate. Rice at Rs 2 per kg, free colour TVs, two acres of wasteland to landless farmers and agricultural labourers, waiver of cooperative loans, free gas stoves, monthly maternity allowance of Rs 1,000 for six months to poor women, and Rs 15,000 marriage fund for women had their effect. Simultaneously, Union information technology minister Dayanidhi Maran has ensured a steady inflow of FDI with IT and telecom majors like Dell, Motorola, Flextronics, Tessolve etc investing Rs 2,235 crore between May and September '06.