India must talk to us and not to the rest of the world, feels Pakistan 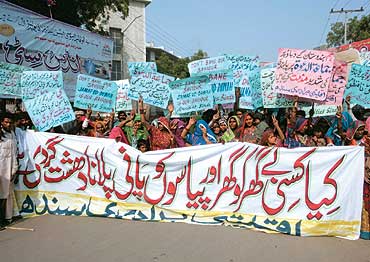 outlookindia.com
-0001-11-30T00:00:00+0553
Pakistanis awoke to an unbelievable sight early this week. Glancing through their morning papers, they saw photographs of hundreds of Hindu women gathered in front of the Press Club in the southern city of Hyderabad, demanding the restrictions on the Islamic charity organisation Jamaat-ud-Dawa be lifted.

Outraged by the Mumbai carnage, the international community had wasted no time in getting the UNSC to put Dawa on the terrorist watch list and have it declared a terrorist organisation. Within hours, the government banned the Dawa, clamped down on its offices and other facilities and arrested hundreds of its members countrywide. Its leader Hafiz Mohammed Saeed was put under house arrest for three months and his headquarters, the Al Qaadsia Mosque, was sealed. Interestingly enough, the UN had even named a dead man, Mohammad Ashraf, the former finance secretary of Dawa, whom they wanted arrested, bolstering accusations that the UN information list was flawed.

And then Hindu women came out on the streets to support the most conservative fundamentalist Muslims in the country. Hindus are a minority in the Sindh province which neighbours Rajasthan. In fact, it's the only state which still has a sizeable number of Hindus.

"The Jamaat-ud-Dawa is a friend of humanity," said Biga Ram, a 40-year-old protester from behind the colourful veil covering her face. How can an organisation providing food and water to us despite knowing we are not Muslim be terrorist? We condemn the ban." In the backdrop were banners saying: "Don't ban our saviours".

For the moment, the Punjab government is thinking of taking over 26 schools run by the Dawa to stave off the criticism that the ban would affect the education of many. This is a dichotomy that confronts not only Pakistan but also organisations like the Hamas, Hezbollah and some Hindu outfits. The charitable work of these Janus-faced organisations is well known. So is their 'terrorist activities'.

Expressing their gratitude to the Dawa were also men and women in Muzaffarabad. Hundreds thronged the streets, shouting slogans: "Long live Jamaat-ud-Dawa! Impose sanctions against Hindu fanatics. Jamaat-ud-Dawa is serving the oppressed and subjugated". It was here and in adjoining villages that Dawa members had launched—and are still involved in—humanitarian efforts following the 2005 earthquake alongside US charities and nato members. Adds Dawa spokesman Attiq-ur-Rehman Chohan, "The government's action will deprive over 40,000 people displaced by the military's operations in the Bajuar Agency (FATA), where people need food, medicines and other essential items."

Meanwhile, Syed Salahuddin, the leader of the United Jehad Council, a coalition of five major jehadi groups, has gone into hiding since Mumbai 26/11.

Protests against the 'crackdown' notwithstanding, there are enough voices within Pakistan asking the government to remain committed in rooting out terror groups. A Gallup Poll conducted in October showed that 60 per cent of the respondents favoured a crackdown on militant groups. "We need to expose the true nature of these forces before the people; to reveal how they have lured vulnerable young teenagers away from their homes and families, only to turn them into killers; how they have exploited religion to further their own interest," wrote The News.

For the time being, the Asif Ali Zardari government is only looking across the border, awaiting some concrete proof from India to start its investigations. It won't be long before someone under arrest moves court. As things stand, Pakistan feels there is not a shred of evidence for the government to try and persecute them in a court of law.

"India has a psychological hump when it comes to Pakistan," says Mushahid Hussain general secretary, PML-Q and chairman of the Foreign Affairs Standing Committee. "Pranab Mukherjee shared evidence with Mr Negroponte (US deputy secretary of sate) and the German interior minister Mr Schauble. Why is he shy of handing over the same dossier to Pakistan, when we have offered all cooperation to India, and when even India says neither the government nor any Pakistani state institution is involved in Mumbai? Without evidence, we can't prosecute and punish the perpetrators. After all, why didn't India charge and try Masood Azhar for three years when he was in their custody? The excuses they give when you ask them are pathetic." In fact, President Zardari and foreign minister Shah Mehmood Qureishi are going hoarse with repeated demands that India help itself and Pakistan by quickly handing over concrete evidence. They are not even contesting the charges that the Mumbai attackers could have been sent by the Lashkar-e-Toiba.

"I don't have any specific information to that effect because the Indians have given us very little information," says Zardari. "I have offered the Indians a joint investigation into this Mumbai incident and if it leads anywhere, we will take action." He is at pains to stress that Indians must understand that the government and the people of Pakistan will be the sole losers of the situation as good relations with its neighbour is high priority for Pakistan. "India should not provide evidence through the media. Instead, it should interact with us through diplomatic channels and show us the evidence. There is no response to our proposals for joint investigation or sending a high-level team to look into the matter," said Qureishi when asked what the next step for Pakistan was.

Pakistan even went as far as to ask China to refrain from vetoing the UN resolution, something they had asked for in the past. This in itself was a telling move—Pakistan was serious and would, with enough evidence, move against these militant groups.

Two weeks after the Mumbai carnage, the government was quite relaxed as it made clear to a string of foreign dignitaries that the ball was in India's court as it had abided by the UN resolution and all it could do was to wait. "Not all actions taken by Pakistan are known to India.... More people have been detained by Pakistani authorities than what is known to the Indians," said US Senate Foreign Relations chairman-designate John Kerry after meetings with the top brass of the Pakistani civil and military leadership.

So, what are Pakistan's options?

"Pakistan's options are clear. We're cooperating with India and the international community on what is a common threat that requires concerted approach through collective action," said Hussain. "There has been a degree of pressure but we have surmounted it because of two reasons: complete national unity amongst the political forces and between the political forces and armed forces, and leverage with the international community which can't do without Pakistan's cooperation on stabilising Afghanistan." He shrugged aside any talk of a civil-military divide, saying, "Let's stop this talk of 'ISI proxies' because then we can go back in history to India's proxies which launched cross-border terrorism in South Asia, namely, Mukti Bahini in 1971 and Tamil Tigers in 1983. And how does Pakistan benefit by playing footsie with those who are attacking our state and society?"