All You Can Eat And More 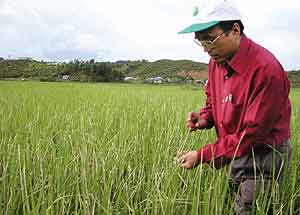 An army of creepy crawlies have invaded Mizoram. Caterpillars in hordes are feasting on standing rice crops, so much so that the government has sounded a famine alert. Officials say the damage could cut the state’s paddy harvest down by 50 per cent this year. "It’s an alarming situation. Caterpillars are eating up rice leaves and destroying the crop in the entire state," says Pankaj Bhattacharjee, deputy director for agriculture.

The menace, called the rice leaf-folder as the insects eat up the leaves and then fold them, began in mid-August. Tribal elders have already started talking of the intermittent famines that occur in the state. "The last time the caterpillar hordes descended on us was in 1959 and had led to the disastrous ‘Mautam’ or death-bringing famine. I fear something similar will happen...," says Mizo tribal elder L. Rokhuma.

Locals say the caterpillar attacks is a precursor to the gregarious flowering of bamboos that, in turn, attract armies of rodents who feed on these flowers before turning their attention to the rice fields and granaries, usually made of bamboo too. Mizoram harvests 40 per cent of India’s 80 million tonnes of bamboo. The government is ready with a detailed plan called the ‘Bamboo Flowering and Famine Combat Scheme’ to combat the next severe famine, expected in 2007.

More than 50 per cent of Mizoram’s nearly nine lakh population is engaged in rice cultivation, spread over 60,000 hectares of land. Already, the caterpillar attacks have hit 350 villages in six districts. "We are trying to get experts from Vietnam, China and Australia to help us tackle it," Bhattacharjee says.

Agriculture minister H. Rammawi says, "We aren’t taking any chances. The records show that famines have struck Mizoram at regular intervals: in 1911, 1929, 1959 and 1977." Free insecticide has been provided to farmers across the state to spray in their fields.