If politics can't stanch the flow of terror, cricket will be a collateral casualty 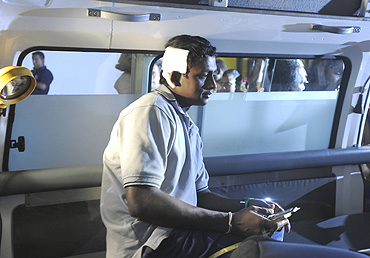 outlookindia.com
-0001-11-30T00:00:00+0553
Among the cherished memories of my life is the warmth shown by the crowd at the Qaddafi Stadium in Lahore towards us Indian journalists, when our cricketers were playing a Test series in Pakistan in 2004. We were mobbed and even our autographs were sought. That tour became a redefining event in the strife-torn relationship between the two nations—and cricket and its burgeoning economy received a further boost. Today, that billion-dollar industry, which drew its strength from an unprecedented economic growth and promise of relative peace in the region, lies in tatters.

The attack on the Sri Lankan players has struck at the heart of cricket and its economy, with India at its centre. What the terrorists set out to achieve when they brought Mumbai to its knees has been completed by this one audacious attack in Lahore. When people like us advocated not mixing politics with sport and using sporting contacts to strengthen people-to-people interaction, we were happily willing to be called bleeding hearts. The faith that terrorists could never harm a cricketer—even the players themselves believed so—proved misplaced. From today onwards, the world we live in has acquired a more sinister dimension, the ramifications of which can cause irrevocable harm to cricket in India as well.

"It is all finished, why should anyone come to play here? It is all senseless," the tremor in Saleem Altaf’s voice on phone from Lahore conveyed pain and anguish, leaving me speechless for a moment. The former Pakistan pace bowler, who is the chief of cricketing operations in Pakistan and a member of the 2011 World Cup Committee, was in Delhi last month. Despite his 64 years and a huge frame, Altaf was bustling with energy and enthusiasm. He had reasons to smile—Pakistan had successfully hosted Sri Lanka for a series of one-day matches, and he was in Delhi attending the International Cricket Council’s World Cup review committee meeting.

The World Cup, to be co-hosted by India, Pakistan and Sri Lanka, had been finally put on rail. A CEO from Pakistan had been appointed to oversee the hosting of the Cup and "(BCCI chief Sharad) Pawar has even promised to get the Indians to Pakistan once the situation stabilises a bit more," Altaf had told me. We even discussed the possibility of an India-Pakistan match at a neutral venue, the proceeds of which would go to the terror victims of the Mumbai tragedy.

How naive we were! "I have absolutely no idea what we should do now. Maybe we can offer the UAE as an alternative to venues in Pakistan for the World Cup, but as of now what hope does cricket have in Pakistan or even in the subcontinent," asked Altaf, who was suffering from stress asthma when the news about the attack on Lankan cricketers reached him.

Yes, what hopes for cricket in the subcontinent itself, let alone Pakistan? We in India probably still don’t realise that in visiting India white, foreign players consider themselves to be as vulnerable to terrorist attacks as they would be in Pakistan. It’s a perception you can’t complain against, particularly after the Mumbai attacks.

We applauded English cricketers, who after having abandoned their tour of India following the Mumbai tragedy, returned to play Tests. Based on the past attitude of the English or even Australian teams, many believed the Englishmen wouldn’t have come back had there been no big bucks to earn, especially in the IPL. Today, when all of a sudden, the cricketers feel that their lives too could be in danger, a debate has already begun on whether India is a safe place to visit.

Former England captain Nasser Hussain, now a widely respected columnist, had welcomed England’s decision to return to India. Today he has this to say: "The 2011 World Cup, due to be staged in the region, has to be in jeopardy. I advocated that England should go back to India after Mumbai, but maybe I was wrong." 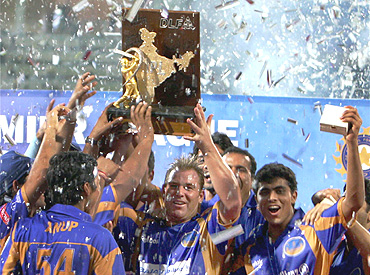 It is not just him, other cricketers too are now doing a rethink on whether or not to take the ‘risk’ of playing in the IPL. New Zealand’s Jacob Oram may have spoken for his fraternity when he said: "IPL may have opened financial doors that I could never dream of. But it would take a lot for me to turn a blind eye to what is going on. I don’t love cricket that much to go to a country putting my life and safety at risk." Indeed, the fear factor is beginning to outweigh others in decision-making.

After Lahore, will anyone dare say this attitude of "theirs" stems from prejudice against "us"?

From the subcontinent’s perspective, the economic meltdown could not have come at a worse time. Despite the media-generated hype, IPL itself is reeling under its impact. The franchises as well as the television company with the telecasting rights are worried at the losses they will have to bear.

The Indian Cricket Board, flush with funds, didn’t want to suffer even a small dip in its revenue. This greed perhaps inspired it to declare that it was willing to play matches under state police protection (we know how incompetent they are) and promply reschedule the IPL matches. Perhaps the person who pushed hard was IPL commissioner Lalit Modi. Had he not been heading IPL, he would have been a nobody in the cricket administration after losing his base in Rajasthan.

But the odds are stacked against IPL, what with the government itself raising doubts over providing security to the teams during the general elections. There may be people who believe that entertainment is as important, if not more, than the exercise in democracy, and national pride will suffer if IPL is not hosted. But, really, how many foreign IPL players would be willing to ignore the Centre’s doubts about security?

It will be an understatement to say that cricket in the subcontinent is in turmoil. Cricket administration requires a statesman to come out of this chaos, but the ultimate leadership has to be provided by the politicians. Cricket’s future is inextricably linked with the shape subcontinental politics takes. If there is no peace, there may be very little cricket as well.

(The writer is Advisor, Sports, with the Hindustan Times)