All Those Jaunty Angles

He purloined hearts as easily as he broke them. Evergreen hero Dev Anand on his life and loves... 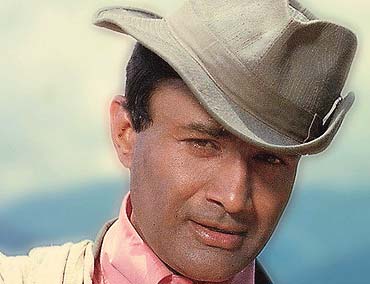 "To be in love with oneself is the beginning of a lifelong romance," said Oscar Wilde, who should have known. Dev Anand has no reservations about his charm, his importance and his popularity. As he says in his Preface: "I, Dev Anand, am certainly the central point of everything I say and do...as a popular star the image of Dev Anand is like that of a deity to his millions of fans."

As one of the Top Three, Dev Anand offered one model of manhood for Indian youth to follow. But it took six years after his entry into the industry, with Guru Dutt’s Baazi, for him to acquire his screen persona—"a hail-fellow-well-met, lovable scoundrel, a tramp, a have-not, on the wrong side of law, but with a heart of gold who does and acts in a manner that endears him to the common man". After that, he played the same role with slight variations. He did not do mythologicals or historical or costume films (except for Insaaniyat which he hated and does not mention here). With good directors like Guru Dutt, Raj Khosla and Vijay Anand, he...