All Out For No Loss 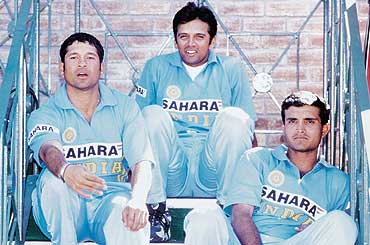 outlookindia.com
-0001-11-30T00:00:00+0553
What do cricketers do when the International Cricket Council (ICC) signs up heavyweight sponsors for its major tournaments and then protects them from "ambush" advertising by rivals? They revolt—as cricketers around the world did last week, refusing to sign contracts prohibiting them from endorsing their ‘rival’ products before, during and after the tournaments. The face-off is the worst crisis in what has been a tumultuous year for cricket—the contract fracas threatens to nix the ICC Champions Trophy in Sri Lanka next month and the World Cup in South Africa.

As this report goes to the press, with the ICC, cricket boards and players wrestling to reach a compromise, what went unnoticed was the silent arrival of media baron Rupert Murdoch in the world of cricket. In fact, he’s reportedly the brain behind the idea—where players give up their right to honour their existing sponsorships and contracts if they clash with those sponsoring the tournaments they are playing in.

It all began two years ago when Global Cricket Corporation (GCC), a consortium owned 50:50 by Murdoch’s News Corp and World Sports Group Nimbus, guaranteed a whopping $550 million (Rs 2,750 crore) for the marketing and media rights of ICC events, including the World Cups of 2003 and 2007, two ICC Champions Trophy tournaments and other events like the Under-19 Youth World Cup. Further, WSG Nimbus was to market the property, for which Sony TV forked out $255 million as TV rights. Nimbus, in turn, was a joint venture between the Seamus O’Brien-owned World Sports Group and Indian Harish Thawani-owned Nimbus Communications. Incidentally, Murdoch also had 5.8 per cent in WSG Nimbus. Recently, news trickled in that Murdoch’s News Corp, a 50 per cent partner in GCC, bought out the other partner, WSG Nimbus, for what reports said was a "nominal" sum. So, now Murdoch is in total control of cricket. His gamble has clearly thrown international cricket in a jeopardy: Australia, England, India and Sri Lanka have refused to sign the contracts. And in India, Sachin Tendulkar could be worst affected.

Murdoch and GCC have made their objective clear: control world cricket financially. The stakes are indeed high. Cricket is a huge property worldwide—Sony has paid $255 million for ICC events till 2007 and espn paid $200-210 million for the rights to all cricket, except the ICC events, in eight of the 10 countries. Doordarshan has a contract with the Indian Board till 2004 for all cricket in India for which they forked out about $50 million. In addition, there is TEN Sports, which has rights to cricket in Sharjah and Morocco. So, the sum total of all these exceeds $500 million. Add to that production costs of about $200-250 million and it’s a figure in the region of $700-750 million over the next five years.

Murdoch’s plan is to get fat sums through TV rights. After the $255 million from Sony, he can go for broadcasters in other countries and then there are Internet rights and Pay TV. With marketing also in its control, it has set the seal with the new contract system. Next they control the pricing of sponsorship packages. In short, News Corp will decide everything and soon they will also have control over which sponsors players sign with.

Meanwhile, the ICC, which sold the whole package, can easily go back to member countries and say that it has been done for their good. From the $550 million booty, the ICC is to distribute a record $102 million to the boards and the players from the ICC Champions Trophy and the 2003 World Cup, which should work out to well over $8.5 million for each participating country. So the Boards have little to complain about.

That’s why they call Murdoch an exponent of total control.

The Genuine Article: UP Or Gujarat?