A smallish Kerala village has its entire population in the autumn of their life. Leading a lonely existence with none of their children around. 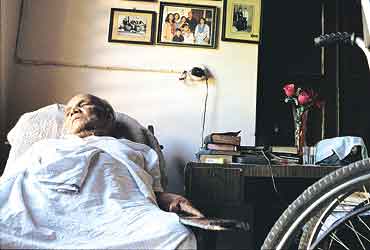 Located in the south-central Pathanamthitta district, Kumbanad is not even a dot on the map but has branches of most nationalised banks—even foreign ones—swollen with overseas remittances, apart from an array of ATMs. It also boasts the largest number of Christian houses of worship—at least fifty of them. On a Sunday afternoon, as usual, sonorous hallelujahs break the rural somnolence but there's a sad irony shrouding the congregation of old folks singing verses that thank the Creator for the good life. After all, there's little they can do otherwise.

Meet A.G. Abraham, aged 97 years, resembling his biblical namesake, in his fairytale house plush with teak and every modern amenity. Once a successful trader in spices and coir, he had prudently spent on educating all his eight children. His wife died a quarter century ago. Today, his children and 30-odd grandchildren, comprising prosperous doctors, engineers and techies, try to ensure that the patriarch wants for nothing. One daughter lives several kilometres away and another lives farther in Thiruvananthapuram. But Abraham puts a brave face on his lonely existence: "Most of my children are just a bell away," he says, clutching his cordless phone as though it's literally his lifeline. The children have engaged a domestic help, Velayudhan Nair, at a monthly salary of Rs 1,500, supplemented by tips and gifts from abroad, and a maid to cook. Nair, who takes Abraham around in his wheelchair, says the old man's favourite pastime is a long bath in warm water. Didn't Abraham want to live with one of his children? "Been to Kuwait once," he replies tersely. "But I tell you, there's no place to beat my village. Now, I'm waiting for the final muster call."