Making of the "Islamic Bomb" 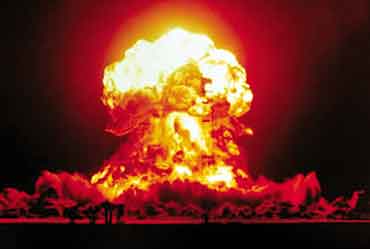 1984 Pakistan obtains a pre-tested, atomic bomb design and bomb-grade enriched uranium from China. Zia declares, "It is our right to obtain the technology and when we acquire this technology, the Islamic world will possess it with us."

1988 Copies of the designs and drawings of the Urenco uranium enrichment plant are handed over to Iran.

1993 Pakistani, Iranian scientists and engineers witness the launch of one Nodong and three Scud missiles in North Korea.

2002 Musharraf says in Paris: "We purchased surface-to-air missile(s) from North Korea sometime back and now we are producing the same type of missiles at home."