All Hands On The Deck 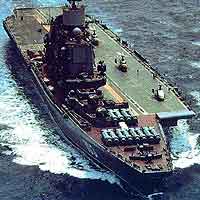 The deal has finally been inked for the procurement of the Russian aircraft carrier, Admiral Gorshkov. It was all along billed as a ‘gift’ from the Russian government. But it has come with a $1.6-billion catch—the money the government will have to pay for refurbishing the ship that has been lying idle for well over a decade. There have been explosions and a fire on it ever since the Russian navy decided to ‘gift’ it in the early ’90s. The official word is that the carrier will become operational in 2010. But sources at the naval headquarters say it could take an additional five to six years. The Gorshkov deal was pushed through despite reservations from within the navy and the air force.

Gently, On The Bramble