Home  »  Magazine  »  Society  » controversy »  AIDS A Virus In the Programme

AIDS A Virus In the Programme 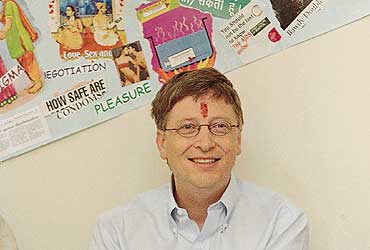 outlookindia.com
-0001-11-30T00:00:00+0553
Avisiting celebrity billionaire doling out charity easily would pass off for a saviour in any Third World nation full of the poor, sick, credulous and corrupt. William H. Gates III mustn't have felt differently. The Microsoft chairman and the world's richest man—at a personal worth of $42 billion (Rs 2,10,000 crore)—got to play the benevolent saint during his four-day visit to India a fortnight ago, during which he committed $100 million for the HIV/AIDS prevention programme. The Gates visit euphoria was shared by all in the AIDS business—from funds-seeking NGOs, activists hopeful of a role in prospective schemes, affected states struggling to stem the spread of the fell disease, to a blundering Union health minister who did an overnight turnaround by hailing a man whom he had damned for 'spreading panic' barely 72 hours ago. And AIDS was back with a bang on the front pages, what with the Gates roadshow coming close on the heels of Central Intelligence Agency's (CIA) curious prediction that India alone would have 20-25 million infections by 2010, up from four million today.

However, a nation blinded by such unprecedented charity from the Saint of Seattle is now faced with the Big Question: is the Bill and Melinda Gates Foundation's $100 million AIDS initiative plain and simple altruism? On the face of it, the answer is No. Because the links between the foundation and multinational pharmaceutical companies looking to sell their expensive anti-retroviral drugs in India and China—the two countries which the CIA describes as the "next wave" of the global AIDS crisis with 40 million infections—are, well, pretty close.

Consider this. The $24 billion foundation has been investing in Big Pharma for some time now. This became public in May when the foundation filed its investments with the US' Securities and Exchange Commission. The Wall Street Journal, followed by the London-based Guardian, blew the lid off the investments by letting out details: the foundation has invested in multinational pharmaceutical companies like Merck & Co, Pfizer Inc and Johnson and Johnson. The investments were worth $205 million on May 16, 2002. These companies are leading manufacturers of AIDS drugs, related vaccines and diagnostic kits. So by acquiring shares in these companies, the foundation now has a common financial interest and, sceptics may revel in the irony, a seeming conflict of interest. Through its funding of the Global Alliance for Vaccines and Immunisations, the foundation pays for purchases of vaccines from the same pharma firms in which it owns shares. Merck's chief executive Raymond Gilmartin even sits on the Microsoft board. So, on the one hand, the foundation is pushing—quite rightly—that vaccines and drugs be made available to poor people, while on the other it shares financial interests with companies that strongly advocate the patent regime and sell drugs to poor nations at astronomical prices.

But the fact is the foundation is not alone in its Big Pharma interests. Gates himself has invested huge sums of his personal money in pharma companies. Media reports appearing in US-based publications in the first week of September quoted the Securities and Exchange Commission records and said that Gates sold nine million Microsoft shares valued at nearly half a billion dollars and invested in Merck, Pfizer and Prozac maker Eli Lilly.

In this context, Gates' philanthropic interest in India for HIV/AIDS acquires a certain resonance."Post 2005, when the patent regime takes over, the same leading global pharma companies will monopolise the Indian drug market and sell the AIDS drug that most of India's population could find unaffordable," says Y.K. Hamied, chairman and managing director of Mumbai-based pharmaceutical company Cipla (see interview). Presently, Indian manufacturers can make generic drugs from formulations patented by any pharma company, locally or globally. This helps bring drug prices down sharply. However, after 2005, they will not be able to manufacture any drug that has been invented and patented by any other company after 1995. This will drastically affect India's prospects in providing cheap drugs to control the spread of HIV/AIDS.

Industry experts say that given the enormous profit margins in patented medicines and a potentially big demand for AIDS drugs, India would be Big Pharma's most favoured destination. Internationally, the annual treatment cost (using patented drugs) of an HIV/AIDS patient comes to around $1,500 (Rs 75,000). If one believes India's National AIDS Control Organisation's (NACO) estimation that there are four million HIV-infected people here, their annual treatment cost alone would amount to $6 billion or approximately Rs 30,000 crore.

So it's not surprising that figures are at the centre of the controversy over the HIV/AIDS "epidemic" in India. Higher the numbers, bigger the demand, and greater the profits to be made. "How else does one explain the rationale behind the unusual interest in HIV/AIDS in India by the Gates Foundation, World Bank, UNAIDS and now even the CIA, and all based on totally unscientific, exaggerated figures? Gates has stakes in pharma companies while others are funded by them," says health activist Purushothaman Mulloli. But raising such voices of dissent could be foolhardy in a pro-AIDS-epidemic cash-rich environment. Mulloli's organisation jack-India first talked about the pharma companies' role in "inventing the AIDS epidemic" in India in the 1990s and subsequently got discredited and isolated among the NGOs in the AIDS sector.

Big Pharma's influence on AIDS is already a hugely debated subject in the West. Says Christian Fiala, Vienna-based gynaecologist and member of the South African Presidential AIDS Advisory Panel: "During the 1980s, pharma companies along with so-called AIDS experts whipped up hysteria of an epidemic in the US and Europe. In the end, nothing happened, simply because it didn't spread in the heterosexual population. In fact, in my country more people have drowned than died of AIDS in the last 20 years." Similarly, in India, tuberculosis, malaria and even asthma kill more people than AIDS (see graphic). Says Dr Etienne de Harven, professor emeritus at the University of Toronto and a leading AIDS policy expert: "The role played by international pharma companies is more than dubious. In fact, it's close to pharmaceutical genocide. Improving the control of tropical infectious diseases is a complex endeavour. Instead, AIDS is a single culprit with great profitability."

Global development agency Oxfam, in one of its latest reports on "US bullying on drug patents", confirms how Big Pharma is dictating health policies across the world. It says that the US government, at the behest of giant pharma companies, is bullying developing countries to introduce unnecessarily high standards of patent protection on medicines. Oxfam reports that the "continued bilateral pressure restricts and delays the production of cheaper generic medicines, with potentially devastating consequences for millions of poor people". The report highlights that 66 per cent of the countries named in the US' Special 301 list—which the US considers to have inadequate protection for patents—were recommended by Pharmaceutical Research and Manufacturers of America (PhRMA).

There are other concerns as well. Says Rev Dr Michael Ellner, president of the New York-based organisation heal (Health Education AIDS Liaison): "The big crime here is that the pharma companies are passing off the HIV tests and the anti-HIV 'treatments' as accurate and effective when both the tests and these anti-retroviral drugs—which are extremely toxic poisons—have already been profoundly discredited in the US."

In the West, a healthy debate has been initiated on almost every aspect of AIDS, right from doubts about its existence to the kind of medication required, efficacy of detection tests, state health policy, and the "dubious" role of pharma companies. Quite in contrast, in India, the entire AIDS agenda has been hijacked by pro-AIDS-epidemic agencies, NGOs and activists. "Questioning unscientific AIDS figures is a crime and doubting philanthropy an even bigger sin," says health activist Anju Singh.

This is not without reason. With funds flooding in, AIDS has become the most sought-after area of work for NGOs. Says Amit Sengupta of the Delhi Science Forum: "There are interest groups here that survive on AIDS. They do not treat AIDS patients but make money simply by making a hue and cry about the epidemic." Dr Suniti Solomon, director, yrg Care, Chennai, who detected the country's first HIV case in 1986, talks of the ground reality. "The Naaz Foundation has 18 beds, but they are in Delhi. So Bill Gates goes there. At yrg Care, we attend to 5,000 patients. We don't want one rupee from Gates, but we only hope it gets utilised properly." With such levels of mistrust and millions of dollars at stake, the AIDS mystery in India will only get murkier. And Big Pharma will be the biggest gainers, never mind the figures.