The ATS probe unravels new layers, but outside pressures remain 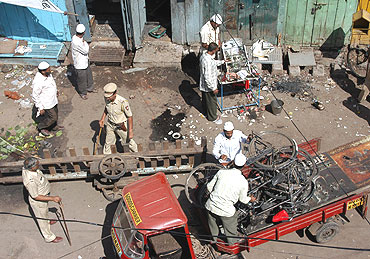 Malegaon Who’s Who (So Far)

The Sept 29 Blasts
Seven people were killed and several injured in the twin low-intensity blasts in a Muslim locality in Malegaon. The bombs were rigged on motorcycles and RDX is said to have been used. The motorcycles were the first clues.

Sameer Kulkarni
Former ABVP member. Revived the Abhinav Bharat in Pune. Worked in a Bhopal printing press for some time and was in charge of AB activities in Madhya Pradesh. Arrested on Oct 28.

Pragya Singh Thakur
aka Sadhvi Purnachetananda Giri. Hails from Bhind in Madhya Pradesh. Arrested from Surat on Oct 23. Connected to Hindutva organisations in MP and Gujarat. Member of the ABVP and Durga Vahini (the VHP women’s wing). Motorbike used in blasts was registered in her name.

Col (retd) S. Raikar
Commandant of Bhonsala Military School, Nashik, who provided the campus for training groups. Was questioned by the police. Has since resigned from the school.

Ramji Kalsangra
Absconding accused. Was in touch with Sadhvi Pragya and allegedly coordinated the blasts.

As senior Anti Terrorism Squad (ATS) officers returned to their chambers after interrogating Lt Col Prasad Shrikant Purohit last week, they were wondering what possible roadblocks lie ahead in the September 29, 2008, Malegaon blast investigation. For if the serving Indian army officer’s disclosures—including the involvement of dharma gurus, names of people from radical Hindutva organisations etc—turned out true, a Pandora’s box was about to open in the politics behind terror. Days later, the probe widened to include Swami Amritananda, alias Dayanand Pandey, from Kanpur in UP, and was set to net "some self-styled spiritual leaders elsewhere in the country".

As the scope of the probe widens, so does the politics around it. From BJP president Rajnath Singh to Maharashtra leader Gopinath Munde to Ram Madhav of the RSS to Himani Savarkar of Abhinav Bharat, the Sangh parivar eminence grise has condemned the ATS investigation for targeting its sympathisers. But as a senior investigating officer told Outlook, "We have done our homework well...there is conclusive evidence of direct involvement." BJP leaders have, through their network, attempted every trick in the book to get the ATS to reveal the evidence against the accused. Sadhvi Pragya Singh Thakur, the first to be arrested a fortnight back, now has hundreds of online communities dedicated to the cause of her release. Demanding evidence to the claim that RDX and weapons were pilfered from an army depot, Munde said: "The police are part of a conspiracy to defame Hindu parties because the Congress votebank is shrinking." Maharashtra CM Vilasrao Deshmukh has denied political interference: "The law-enforcing agencies are dealing with the case as they think fit. We won’t bring politics into this," he told Outlook. Through the din, ATS chief Hemant Karkare has had only one message for his teams, now spread across Maharashtra, UP, Jammu and Gujarat: "Stick to the facts, get the evidence." The pressure is already showing; in a rare candid moment, Karkare remarked to a friend that he "was worried about all this politicisation". Karkare has found support from Julio Ribeiro, ex-Mumbai police commissioner and Punjab DG, who publicly vouched for his integrity and investigating skills. As Javed Anand, founder-member of Citizens for Peace and Justice, put it, "I can’t see a serving IPS officer going after an army officer or saffron outfits unless there is concrete evidence."

That said, the probe has been a minefield. Leads hit dead ends, some even turn contradictory. For instance, Lt Col Purohit’s interrogators realised there was something amiss when the ex-MI man gave information to questions on dummy situations and people. Was he leading them on? Sources say the ATS had at least three other officers under its scanner, and wanted to interrogate them. That it didn’t happen says a lot about the enormous pressure the squad is under.

Perhaps why, after six weeks, the ATS is still connecting the dots. ATS sources say at least a handful more arrests are likely after that of Dayanand Pandey in Kanpur. Meanwhile, the slew of forensic tests—mainly the narco-analysis—on Lt Col Purohit has led to the opening of yet another flank, the possible involvement of radicalised Muslims aiding the Malegaon operation. There are leads in Gujarat, mainly through Sameer Kulkarni, arrested for his role as Abhinav Bharat organiser. Kulkarni was in regular touch with Hindutva leaders in Gujarat and had organised camps in the communally sensitive area of the Dangs, but this needs validation. There are leads of some Hindu leaders from Bangladesh having attended the training camps held at the Bhonsala Military School, which require a deeper probe. From Lt Col Purohit’s laptop have emerged 50-odd names that need thorough checking before anyone can be interrogated or given a clean chit. Most important, the RDX used in the blast has to be profiled, so that it can be matched to a larger sample.

The spotlight, though, always returns to Purohit. He is believed to have generated and used funds to the tune of Rs 20 lakh while he had "access" to the military’s Secret Service Fund. He is believed to have been in touch with radical Hindus in Pakistan and Bangladesh. There are many dots that the ATS has to link in this unravelling network. In a quirk of fate, as it were, Purohit’s interrogators were among his audience in 2005 when he and Lt Col (retd) Shailesh Raikar were invited by the then new ATS to brief them on intelligence gathering, infiltrating radical groups, and so on.

Purohit has also been questioned by a CBI team that sought to find links between him and the Nanded explosions in April ’06 at the house of a RSS sympathiser in which two activists were killed. The ATS now believes he could also be the link to the minor blasts outside mosques in Jalna, Purna and Parbhani in ’04, and to the Malegaon cycle blasts of September ’06 that killed 30 people. When the ATS started investigating Malegaon ’06, officers came upon the involvement of radical Hindus but many of these leads fizzled out after the probe was handed over to the CBI. If all the ATS claims turn out true, radical Hindu outfits that escaped scrutiny then may again come under the scanner.

The Body Politic In Uniform