Faking age certificates is a burgeoning 'sector' in unemployment-hit Bihar 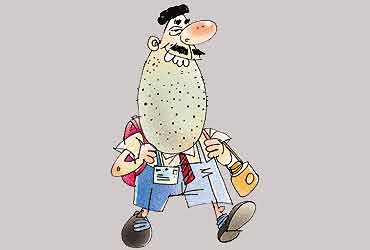 outlookindia.com
-0001-11-30T00:00:00+0553
Ajay Kumar is 35. A piece of paper with an illegible signature and a rubber stamp however certifies 1988 as his year of birth. He attempted to appear in Bihar’s secondary school examination this year, claiming to be 16. A resident of Ramdauli in the state’s Vaishali district, he passed his BA exam a few years back. So why is Ajay Kumar trying his hand at a matriculation exam all over again?

Sheepishly admitting he had already passed the exam, Ajay rues, "My degrees are of no use. They can’t give me a job." He was advised by someone to go through the secondary exam again and get a new certificate, with a new age. This, he says, would have helped in applying for a job of a para-teacher, or in the police and army, or for any grade III government job. The moustachioed Ajay dumped his old certificates and spent a few hundred rupees to get an age certificate from a broker who impersonated a judicial magistrate and put a false seal on it.

On the basis of this certificate, Ajay appeared in the exam from SS Vidyamandir Vidyalaya in Ramdauli. His luck ran out when the chairman of the Bihar School Examination Board (BSEB) visited the exam centre and pulled many candidates out on suspicion. A medical board was set up to examine their age and it emerged that Ajay’s was double that claimed in his document.

Ajay is not the only such case. Ravi Ranjan of Narharpur, Sumit Kumar of Jurawanpur, Avinash Kumar of Mahua, all have similar stories. Several thousand such candidates with fake age ‘proof’ appear in the secondary exam every year. "This has been going on unabated for many years," says BSEB chairman Subhash Sharma, who caught about 6,000 such cases this year alone.

"An education mafia, in connivance with hundreds of schools and some BSEB officials, is managing this racket," he says. The exams of these candidates have been cancelled and over 100 staffers suspended, punished or censured.

Several schools actually seem to facilitate private candidates who want to use the exam as a route to employment. Out of 136 students who appeared from Gandhi Smarak Vidyalaya in Jehanabad, 106 were found over-age. In High School Obra and Rukundi, both in Aurangabad, 98 per cent of the candidates had faked their age documents. At Shaheed High School at Lakhna in Masaurhi, out of 1,700 candidates, there were only 120 bona fide documents. "The schools have no right to challenge a judicial affidavit," says a headmaster. 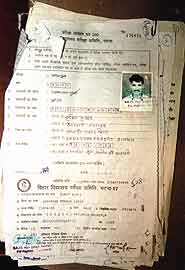 The BSEB has decided to write to the director, secondary education, to take action against the schools from where most such private candidates appear. "Apart from touts, the schools also charge fake candidates for helping them appear in the exam," says Sharma, who is facing the ire of this politically patronised mafia. Last week, a local goon, who is related to Union railway minister Laloo Yadav, barged into his office and threatened him for cancelling the exam of hundreds of candidates. The education mafia, in the garb of self-styled associations, is trying to frustrate his drive, says Sharma, a no-nonsense bureaucrat, "But we are determined to remove the dirt and dust."

This age racket is just one more scandal in Bihar’s scam-riddled education department, where degrees are for sale and new educational institutions open like cattle sheds, without bothering about norms and regulations. Officials admit several over-age persons have got jobs in government and quasi-governmental departments on the basis of fake papers.

The problem may be uniquely large in Bihar, but age-fiddling is not unknown elsewhere. Recently M. Rama Jois, the chancellor of state universities, directed all vice-chancellors to keep a check on such private candidates. They may get caught, but their number only underlines the deeper malaise that limits employment opportunities—and employability—for millions of Indians.