Visva Bharati's copyright over Tagore's canon is about to end. The result is likely to be a Rabindrasangeet glasnost. 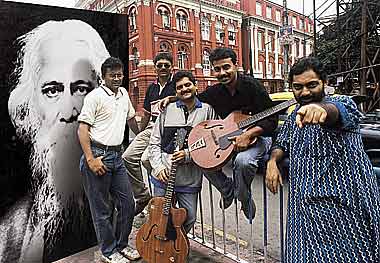 outlookindia.com
-0001-11-30T00:00:00+0553
Over a thousand poems, some two dozen plays and playlets, eight novels, eight volumes of short stories, a mass of prose on literary, social, religious and political themes and nearly 3,000 songs. In a 60-year-long creative life, Rabindranath Tagore clearly didn't waste much time. At the end of the day, the prolific bard, however, could not find time to set most of his songs to music. As a consequence, some 2,300 of his songs have been lying unsung and Rabindrasangeet is possibly poorer for that.

Now Visva Bharati, the 79-year-old university that Tagore founded at Santiniketan, 160 km from Calcutta, is planning to change all that. The R.N. Tagore Trust, which owns and handles the Nobel laureate's creations, now plans to 'offer' these songs to singers to set notations and record. In the cloistered world of Rabindrasangeet, where songs are whetted by a puritanical university-run music board for quality and only a handful of musicians have made their mark singing some 730 songs which the bard wrote notations for, this is an epochal happening. Says Visva Bharati V-C Dilip Kumar Sinha: "Tagore became a property of few people and there were too many vested interests around his creations. We are trying to change all that by offering these songs to composers and singers who are willing to set them to music."

It looks like an effort to democratise a musical canon which, ironically, has drawn from an eclectic range of influences: from Hindustani and Carnatic classical and Indian folk to Irish, Scottish and German folk songs. In fact, the bard himself was not averse to foreigners setting his lyrics to music—a French composer had come to Santiniketan and written notations for 26 of Tagore's songs. But the university's music board, often accused of being fascistly proprietorial about the songs, even forced celebrated exponent Debabrata Biswas to stop recording in the early '70s after repeatedly spiking his inventive renderings.

The powerful music board's role as a gatekeeper to its founder's music is pretty elaborate: the artist or the recording company has to submit a list of selected songs, record a pilot tape in the event of a go-ahead, which, in turn, has to be cleared for quality by three musician-members. Songs are whetted for their articulation, tune, arrangements and even an intangible and subjective 'mood'. Says Calcutta filmmaker Rituparno Ghosh: "There has been a concerted effort to iconise Tagore." Ghosh had to apply for the music board's permission to use one song for his upcoming film Utsav.

He is not quite off the mark. Nobody, including Bengal's best known exponents, has shown enough courage in going ahead and writing notations for the unsung songs. So much so that when Sinha formed a stellar committee comprising the late Shantideb Ghosh, Suchitra Mitra and the late Kanika Bandopadhyay to write notations for some 2,300 verses, all of them, barring Bandopadhyay, put their foot down. "It is a daunting task, they said. They also said it was better to concentrate on the songs that were already being sung," says Sinha.

But Sinha's attempts at a glasnost in Rabindrasangeet have a curious ring to them: the Visva Bharati University is set to lose its 60-year-old copyright over the bard's creations this December. His entire work would then become public anyway. With it, the royalties from the songs pouring into the music board's coffers will also end: the board earned Rs 18 lakh from royalties—5 per cent of the sale of every Rabindrasangeet tape sold—from recording companies and film producers last year, up from Rs 7 to 8 lakh in the previous years."Why this selective opening up when they have to let go Tagore's works anyway next year?" wonders filmmaker Ghosh.

Wrong, says Sinha. He insists that the question of the demise of India's most famous copyright is not yet a fait accompli despite the Union human resources development ministry turning down his plea for extending it last year. The new logic: the R.N. Tagore Trust which owns the bard's works is an independent body and has "nothing to do with the university". So Visva Bharati, which has generated a surplus—a little over Rs 1 crore—for the first time in years, still wants to retain some control over the creations and rake in the copyright royalties. Sinha, however, says: "The Copyright Act cannot be extended to the trust. Just wait and watch."

So what next? Tagore blues, fusion and rock-and-roll? To be sure, stealthy gentle experimentations with Rabindrasangeet have already begun. The board, possibly aware that its official role as the Tagore tastemaker is coming to an end, is also showing the green light. In recent years, Swagatalakshmi Dasgupta, one of the most formidable contemporary Rabindrasangeet talents, cut two albums which explore the Carnatic and Irish-Scottish folk influences of the bard to embarrassing near-lift-off levels—she sang the Tagore song in Bengali and the original. Controversial singer Suman Chattopadhyay cut another album of Tagore songs using acoustic guitar. Netherlands-based civil engineer Sudip Ghosh has managed to get the music board's permission to record 21 Tagore songs with a distinct jazzy feel complete with a horns section and cut an album. Sixtysomething singer Pijush Kanti Sarkar is keen on producing a Tagore music video. The Calcutta Foundation Orchestra, a 25-strong string orchestra which uses violin, viola, cello and double bass, is regularly performing a dozen Tagore songs set to western classical after transcribing the Indian notes with a Bengali vocalist. Now singer Asha Bhonsle has evinced interest in singing Tagore songs with the same orchestra. "We would be very interested in having a look at the unsung songs to see whether our composers could write notations for them," says Shamlu Dudeja, associated with the orchestra.

The floodgates could open further and Tagore could begin rocking too. Bangla rockers in Calcutta seem excited by the prospect of setting music to the bard's lyrics. Says Calcutta-based rock band Chandrabindoo's Anindya Chatterjee: "It's a thrilling proposition for us. We would love to tackle some of his songs. It would mean a lot for the evolution of Bengali music." Agrees Patrick Sanjiv Lal Ghosh, manager and singer with folk band Bhoomi: "We must tackle some of the 'freed' lyrics. For people like us, this will throw up new challenges." Others, like exponent Subinoy Roy, are wary of the moves to free Rabindrasangeet. "Musicians and others must tread with caution," he says. "Whatever melodies they employ, will the songs be recognisable as Rabindrasangeet?" Younger singers like Indranil Sen are upbeat: "I'll be the first bidder for the unsung songs. A lot them can be set to popular tunes. But I'm not sure whether his lyrics can be set to rock-and-roll."

Copyright or not, the move to democratise Tagore songs is a welcome one. As Sinha says: "Maybe it will help make Rabindrasangeet truly national music, rather than just Bengali." In Bengal, this can only translate into climbing sales of Tagore songs. Currently, Rabindrasangeet comprises 17 per cent of the 5 million Bengali music tapes sold annually and the genre's sales have been rising at a steady clip of 7 to 8 per cent a year."This move can only help Rabindrasangeet's fortunes," says Jyoti Shankar Gupta of hmv, the recording company with the biggest roster of recorded Tagore songs. In the end, fears about trivialising a music which is essential to the Bengali consciousness seem unfounded. "Let the audience be the judge," says filmmaker Ghosh. "If a rendering is bad, they will reject it, whether it's rock or jazz." But the music will finally breathe free.

With Ashis K. Biswas in Calcutta