The Sun TV empire's writ ran even in Delhi. Too big, too soon? 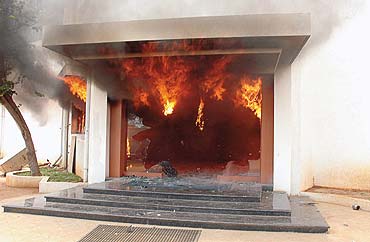 Here's why the Sun network needs the DMK:

With 20 television channels panning South India, seven FM radio stations, two Tamil newspapers and four magazines, an English-language tabloid based out of Chennai in the pipeline (a tie-up with media mogul Rupert Murdoch), the sky seems to be the limit for Kalanidhi Maran's media empire. After being listed in the stock exchange, Sun TV Ltd's shares have done well, but for the drop of about 8 per cent (worth Rs 900 crore) since brother Dayanidhi's resignation. He later claimed at a press meet that he had nothing to do with Sun TV though Sun's offer document filed with SEBI in April '06 introduced him as a promoter.

Dayanidhi, before becoming Union minister, used to head Sumangali Cable Vision, a multi-system operator of the Sun group that had near-monopoly control over the cable network and distribution of set-top boxes. Much of the success that has come Sun's way owes not just to Kalanidhi's skills acquired as an MBA graduate at University of Scranton, us, but also to the close association with the DMK.