Despite Mayawati playing the spoiler, the BJP refuses to give up on its fantastic plans 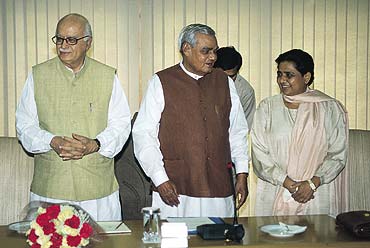 outlookindia.com
-0001-11-30T00:00:00+0553
Mayawati has delivered nothing short of a mighty blow to the BJP's national ambitions. By walking out of an alliance in which the BJP had invested so much, she has literally left the party high and dry. The immediate outcome is that all talk of an early general election is over. The BJP will need some time to lick its wounds and catch its breath and will now wait for the general elections to happen as scheduled, that is next year, and try to hold the UP polls simultaneously.

Mayawati was of paramount importance to the BJP for a number of reasons. There was the symbolism of propping up a Dalit woman as CM, which went down well with the larger Sangh parivar keen to transcend its Brahmin-Thakur-Bania base. But more crucial was the electoral "plan" devised by the BJP's national leadership: she would help the party win a chunk of Lok Sabha seats from UP in exchange for the chief ministership.

Reason why the BJP's national leadership had not heeded the warnings of the state unit that the party's base was being systematically destroyed under Mayawati. And now, the BJP has been left with nothing in hand. The party's base has been eroded, with the powerful Thakurs angry with it for failing to protect them from Mayawati. And with general elections looming on the horizon, the BJP is unclear about how it'll compensate for a massive shortfall in the state that sends the maximum number of MPs to the Lok Sabha. Clutching at straws, both the state and national leaders have again begun the Ram mandir incantation. The ASI report suggesting a 12th century temple under the disputed structure is being seen as a "god-given boon" by the BJP. With CM Mulayam Singh Yadav acting as the perfect foil, some BJP leaders are again dreaming of the good old times when the party rode high on an Ayodhya agitation.

But party strategists warn of "Ayodhya fatigue". A senior BJP leader admits: "There's no guarantee the issue will help us revive. A lot will depend on how Mulayam plays his hand. At the moment the ASI report is all we have." That's why party president Venkaiah Naidu says "the BJP will move from caste-based to issue-based politics. Muslims must help us build a temple at Ayodhya as a symbol of national self-respect now that the ultimate evidence...is before us".

Apart from wishing for an Ayodhya miracle, some hard-headed calculations are also being made. The immediate worry is the fallout in MP's Bundelkhand region where the BSP has a support base. All the BJP's hopes of a seat-sharing pact with the BSP in the coming assembly polls have been dashed.

But the BJP continues with its fantastic calculations. It feels that Mayawati, squeezed both by the CBI inquiry and by Mulayam in UP, will have no one to turn to but the BJP again. The Congress in UP is after all a marginal force, argue BJP strategists. In other words, the BJP doesn't rule out "compelling" Mayawati to bail them out in UP.

A strategy that may well boomerang with a hard-headed politico like Mayawati. But then the BJP is in dire straits in UP. And desperate times call for desperate measures.