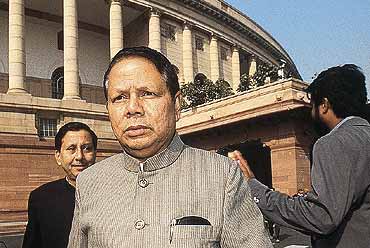 outlookindia.com
-0001-11-30T00:00:00+0553
It was 11.35 am. We were just through with a meeting in the Speaker’s Chamber. There was Mulayam Singh, Pramod Mahajan, Shivraj Patil and I. Some TV journalists wanted me to step outside to give a sound byte. I was at Gate No 1 (main exit from the Parliament building) when I heard gunfire. Soon after I saw people running. The Lok Sabha security closed the door abruptly and asked us to stay inside.

Some of us rushed to room No 25 next to the Congress Parliamentary Party office. I was with a Times of India journalist and Shivraj Patil. A little later curiosity got the better of us and we stepped out. We saw Kuldip Nayyar and Sanjay Nirupam in the corridor. I told them it was inadvisable to stay inside as there could be an explosion within Parliament. So we went out to the inner courtyard outside the Central Hall—but within the Parliament building—and stood near the statue of Maulana Azad. We had no clue about what was happening. Our mobiles had stopped working. Most of the MPs were either in the Central Hall or in their rooms. The security staff had sealed all exits and was not letting anyone go out.

Initially there was panic. No one knew what was happening. Various dark thoughts went through our minds. Will the Parliament be blown up? Someone said a nuclear device had been planted. Rumours like these persisted for some time. But gradually we became more realistic. Someone said POTO should be passed. But POTO is already in place and despite it all this happened.

The sound of gunfire ceased at about 12.30 pm. We went to Pramod Mahajan’s office to enquire if all was well. George Fernandes, L.K. Advani, Dr Manmohan Singh were already there. No one knew what had happened. Advaniji had no explanation. Like us, he too was confused. The home minister said something about alerting the NSG. Then he said he was going to ask the police commissioner to send a contingent.

Patil and I were out in the corridor again. The security guards showed us how Gate no 1 had been fired upon. The bullets had reached inside Parliament and perforated the notice board near the door. We went to Nitish Kumar’s office and called him out to see the notice board.

At 2 pm we heard that arrangements were being made for MPs to exit Parliament. By now the army and the para-military were in position. I didn’t leave immediately but ambled across to the Speaker’s Chamber. Arun Jaitley, Pramod Mahajan, Venkaiah Naidu, Sushma Swaraj, Shivraj Patil and Advaniji were all there. They were viewing the video recording of events shot by Parliament’s internal security cameras.

It showed an Ambassador coming in and parking near the Rajya Sabha gate where Sonia Gandhi exits from and where the Vice-President’s car was parked. Three men who looked like civilians and carrying backpacks stepped out. A fourth person who got out and then went back to the car as if to get something. In all, I counted six men getting out of the car. But only five were killed. The close circuit TV camera recording clearly showed the six men. I wondered where the sixth militant was.

The recording over, the home minister concluded that all the terrorists had been killed. I reminded the Speaker that during the last session I had had an intuition about a possible attack on Parliament. At that time the Srinagar assembly had been attacked and I kept thinking about how fragile our iron gates in Delhi were and that the watch and ward staff inside the House are unarmed.

(As told to Priya Sahgal.)

Free And Fair In Kashmir