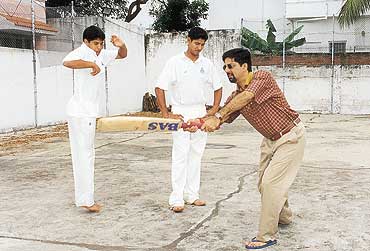 outlookindia.com
-0001-11-30T00:00:00+0553
Adithyaa and Aniruda Srikkanth, 17 and 14, batsmen: Strangely enough, the 6.1 ft-tall left-handed Adithyaa took to the game after he watched his icon Brian Lara bat in the Hero Cup, and not because papa was India's most exciting opener. And as captain of Tamil Nadu's under-19 team (he has led the state in under-14 and under-16 too), he's neither superstitious nor the picture of restlessness as his dad was (Who can forget Srikkanth's looking up at the sun before stepping out to bat, sniffing, twirling his bat, pacing around the crease?).

Adi plays first division for Chemplast and has averaged 45 in six matches this season. He hopes to make it to the Ranji team next year and to the Indian team by 2004. "I was selected for the Buchi Babu Trophy team. Now, I have to make it to Ranji, score hundreds, and play in the Duleep Trophy and keep scoring." Stuart Binny is a "damn close friend" of his. Ditto with Udit Patel.

Surprisingly, Adi finds five-day matches boring. He never watches a full Test on TV or at the ground. "I watch the highlights at night when someone says a particular innings was good." With such an attitude, how does he hope for a Test cap? "That's different," he says and laughs it off. Says coach Abdul Jabbar: "Everything is good about Adithyaa. He is hard-working, has a great body, and is a powerful striker of the ball. But he's been making only 40s-70s and has to convert these into bigger scores. He needs to develop a big-match attitude."

However, Chikka's aggression is mirrored in his younger son Aniruda. Ani opens the innings for Tamil Nadu's under-14 side and loves to blaze away from the first ball! Srikkanth and his wife Vidya are keen that both sons make it to the Indian team, like the Waugh brothers. Says Adi: "I like Steve", while Ani chimes in: "I love Mark."

Srikkanth insists that he does not interfere with his sons' games. "I just want them to enjoy cricket and take it naturally. I don't even go watch them play; they don't like it." But as second-generation cricketers, Adi and Ani have other advantages as well. Despite being born in a Tamil-Brahmin family, they are non-vegetarians, and the parents do not mind. But there are other things they mind. "We get shouted at for hanging out too much with friends," say the boys.