Some urge calm, but most Pakistanis think their country is just India's usual whipping boy 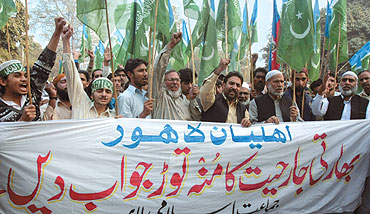 Huma Meer, Teacher
"If jehadis were involved, they were renegades trying to sabotage the peace process. India and Pakistan should not let the blame game strengthen such rogue elements."

Mujahid Ali Khan, New York-based Pakistani
"Pakistan couldn’t be involved in the terror attacks, primarily because its internal political-economic situation doesn’t allow it to afford such an adventure."

Mehreen Jabbar, Filmmaker
"The two countries should evolve a joint strategy to prevent such inhuman acts. They have to desist from jingoism, for it could eventually lead to a nuclear war."